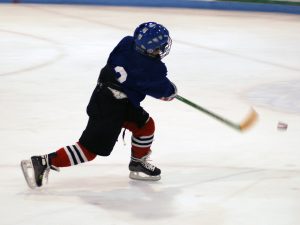 Have you ever been given a great gift that greatly impacted your life? I can remember several times that I have been gifted things that changed the trajectory of my life. Our neighbor growing up had been a professional hockey player, and one day for my birthday he stopped by my birthday party and gifted ME one of HIS hockey sticks! I didn’t know much about hockey at the time (nor care much for it), but I was incredibly excited to receive this gift from a former Red Wing.

This stick was left handed, and even though I am naturally right handed, I first learned to play using that lefty stick. I ended up falling in love with hockey, playing it for two decades, including in college, and always playing left handed because of having learned with that stick (I remain right handed in every aspect of my life, except hockey). Had it not been for this gift it is unlikely that this Iowa boy would have ever discovered hockey. A great gift, when put to good use, can have long-lasting impact.

One of the most dramatic events in Scripture, in my opinion, occurs in 2 Kings 22. This takes place after the Temple of Jerusalem has been destroyed and the people have long forgotten about God’s Word. As construction crews were beginning reconstruction a man name Hilkiah found the Holy Scriptures deep in the rubble. He gave it a gift to the King’s secretary, which is where we pick up the story:

Then Shaphan the secretary told the king, “Hilkiah the priest has given me a book.” And Shaphan read it before the king. When the king heard the words of the Book of the Law, he tore his clothes. And the king commanded Hilkiah the priest, and Ahikam the son of Shaphan, and Achbor the son of Micaiah, and Shaphan the secretary, and Asaiah the king’s servant, saying, “Go, inquire of the Lord for me, and for the people, and for all Judah, concerning the words of this book that has been found.” 2 Kings 22:10-13

I love that verse: Hilkiah the priest has given me a book. It seems so simple and mundane: the King received a gift of a book. We receive books, or at least recommendations for books, all the time. Yet, look at the impact the reading of this book has. As soon as the King has heard God’s Word his life, and the lives of his people, change. He repents of his sins by tearing his clothes, he calls on his assistants to study it in-depth, and he calls upon the whole nation to begin living by it. Suddenly, the lives of all the Israelites take a dramatic turn for the better, all because someone gave someone else a book, and that someone chose to follow it.

Friends, that’s the power of the Bible! It’s the Word of God given to us to direct our lives, to inspire us, to transform us, and to share the message of salvation with us. It’s not just any book, but a gift directly from God for us. Let’s not let this book get berried amidst the craziness of our lives: our schedules, the messages of the world, our own desires, etc. Instead, like King Josiah, lets excitedly dive into the Word, letting this great gift transform our lives and the lives of others around us.