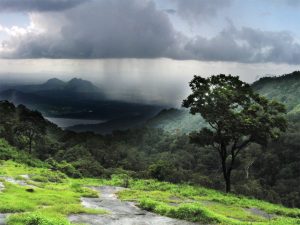 April is the hottest month of the year in Nicaragua. Think Iowa in July…only worse. Not to give you too much information, but I can typically wring the sweat out of my shirt by 10:30am. Air conditioning is a rarity, and its incredibly expensive to run it if you have it. That means there is typically only one thing that can allieviate the heat: rain. Every cloud in the sky is a little hope that maybe, just maybe, we’ll get some rain and the temporary, but glorious, coolness it brings. Sometimes a little hope of rain can carry me through the hottest of days.

There is an account in the Bible where a single cloud brought tremendous hope. It occurs right after one of the Bible’s most famous events, Elijah’s victory over the prophets of Baal. In a “competition” with the prophets of idol Baal Elijah was able to call forth fire from heaven to miraculously prove God’s power. While the heavenly fire gets all the attention, that was not the end of the story. The problem that led to the contest, a severe drought, remained unresolved. Immedietly, however, Elijah declares to the King that there would soon be a very heavy rain. One can imagine Elijah soon realizing he had made a promise he was unable to keep. He soon climbs up the mountain to pray for a miracle.

Elijah went up to the top of Mount Carmel. And he bowed himself down on the earth and put his face between his knees. And he said to his servant, “Go up now, look toward the sea.” And he went up and looked and said, “There is nothing.” And he said, “Go again,” seven times. And at the seventh time he said, “Behold, a little cloud like a man’s hand is rising from the sea.” And he said, “Go up, say to Ahab, ‘Prepare your chariot and go down, lest the rain stop you.’” And in a little while the heavens grew black with clouds and wind, and there was a great rain. And Ahab rode and went to Jezreel. And the hand of the Lord was on Elijah, and he gathered up his garment and ran before Ahab to the entrance of Jezreel. 1 Kings 18:42-46

Even though Elijah had just witness God send a heavenly fire, he begins to doubt that rain is comming. SEVEN times he asks his assistant for evidence of rain. The seventh time the assistant sees a cloud, but its so tiny its the size of a hand. Yet, Elijah sees the hope of rain, and begins celebrating. Just like a small cloud gave Elijah hope, God has given us a sign of hope: the Cross of Christ Jesus. The Cross forever reminds us that God, in His mercy, has promised us eternal life. The Cross gives us hope no matter our trials and tribulations. Easter may have come and gone, but we forever have the promise and hope given by the Cross and the empty tomb. Like Elijah celebrated that little cloud, may we forever rejoice in the perfect hope the Cross gives us.

← Destiny is Fulfilled! How to Make a Difference- Part 2 →