Am I great yet? 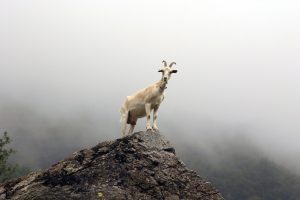 In recent years the term GOAT (Greatest Of All Time) has become widely used in sports. In football it often gets tossed around when referring to Tom Brady, and in basketball in the never-ending Michael Jordan vs. Lebron James debate (IMHO its CLEARLY Michael Jordan and this conversation is useless). In fact, it seems that there can hardly be a sports broadcast without discussion of who the GOAT of that sport, team, position, etc. is. All of this talk about the GOAT seems to be indicative of  a human obsession with greatness. Lets face it, many of us worry about greatness more then we’d like to admit. We worry if we are living a life of greatness, if others will remember any great accomplishments from our lives, or if anyone we include our actions in their lists of great things. Some version of the question: am I great yet? may even pop into our head.

This obsession with greatness is far from new. In fact, it dominated conversations in Biblical times as well. Jesus’ disciples famously debated about which of them was the greatest, and achieving greatness was a common question in the cities Paul visited. In fact, people spent considerable time and energy trying to make their personal cases for greatness in the ever fickle court of public opinion. This was particularly the case in the city of Rome, where the attainment of fame and prestige often took center stage. It was in this atmosphere of obsession over greatness that Paul wrote the following:

Consider your calling, brothers: not many of you were wise according to worldly standards, not many were powerful, not many were of noble birth. But God chose what is foolish in the world to shame the wise; God chose what is weak in the world to shame the strong; God chose what is low and despised in the world, even things that are not, to bring to nothing things that are, so that no human being might boast in the presence of God. And because of him you are in Christ Jesus, who became to us wisdom from God, righteousness and sanctification and redemption, so that, as it is written, “Let the one who boasts, boast in the Lord.” 1 Corinthians 1:26-31

See, true greatness comes not from our abilities, our fame, or our achievements, it comes only from the grace of Christ. Yes, we can accomplish things that may be cheered and deemed “great” by some for a time, but such greatness fades away. The only way we achieve that which is truly great, eternal life in a perfect heaven, comes from the sacrificial death of Christ Jesus on the Cross. This year, instead of spending so much time and energy searching for greatness in the eyes of others, let us remember that the greatest thing about all of us is not what we have accomplished, but what Christ has accomplished for us.

← The Cost of Being a Disciple Reminders →