Appreciate the Gift of Christmas 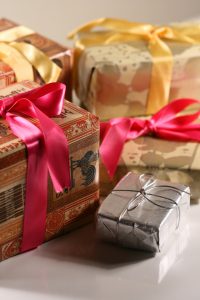 I still vividly remember the joy I had every Christmas morning as I opened my presents. I had spent months investigating every present under the tree, carefully weighing them, gently shaking them, and doing whatever I could to glean clues as to what I was to receive. As soon as I opened each gift I was ready to put it to good use. More than once, however, a gift did not work out exactly as planned. One year my parents let me open a present early so I could use it in the car on the way to Grandma’s. It was a handout video game, a simple one game handheld that was a precursor to Gameboy (I’m that old). I was thrilled to get it, and could not wait for the trip to Grandma’s. The game, however, was harder than I expected. Try as I might, I found myself constantly losing, which led to constant complaining. I then violated the greatest of all Christmas commandments in the Baker house: I said I wish I’d never received it! I’d tell you how well that went over, but modern society would likely deem my parents’ response abuse. Sometimes it simply hard to appreciate the gift of Christmas.

I share this story because, far to often, we react similarly to the true gift of Christmas, our Lord and Savior Jesus Christ. When things get difficult, or simply don’t go our way, we find ourselves complaining and missing the whole point of the gift. Here’s how the Bible puts it. John the Baptist was in the wilderness, proclaiming the coming of the Messiah and baptizing those who confessed their sins. A group of religious leaders saw these gifts and started complaining. How could John preach about forgiveness? If John was right about the forgiveness of sins, the leaders (who derived their power and self-worth from a belief they were better than others because the “sinned less”) would be equal to everyone else. Obviously, this was a gift they were none to happy about. Here’s John’s response:

But when he saw many of the Pharisees and Sadducees coming to his baptism, he said to them, “You brood of vipers! Who warned you to flee from the wrath to come? Bear fruit in keeping with repentance. Matthew 3:7-8

Look at what John says about how we should respond to the gift of Christ Jesus. He doesn’t say we should complain, even when things may appear not to our liking. Instead, he says: bear fruit in keeping with repentance. See, Christmas is not just about receiving the gift, it’s also about what we do with that gift. John teaches us that the correct response to forgiveness is to live a life which bears fruit for God. A life that makes a difference. This Christmas season, how are you responding to the gift of the Christ child? I pray that no matter where we are this season that we may pause to reflect upon our lives, asking ourselves if we are living lives that bear true fruit for the Kingdom of God.