There was a man who was paralyzed.  He had four friends and might I add they were the right kind of friends!  These friends heard that Jesus was a healer, so they decided to take their friend on a mat to Jesus.  Jesus fame was growing in the city and when Jesus would teach crowds would gather.  On the day these friends were going to bring their friend to Jesus there was a crowd so big there was no room in the house and there was no room outside the front door.  The man on the mat was probably used to disappointment.  I am sure he felt like today was not his day due to there not being any room. 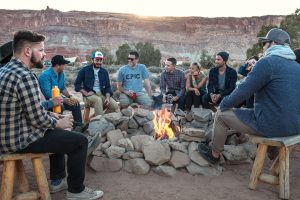 His friends would not be defeated so easily.  So they decided to go up on the roof and create a door. Here is what happened next:

5 When Jesus saw the extent of their faith, he said to the paralyzed man, “My son, your sins are now forgiven.”

6 This offended some of the religious scholars who were present, and they reasoned among themselves, 7 “Who does he think he is to speak this way? This is blasphemy for sure! Only God himself can forgive sins!”

8 Jesus supernaturally perceived their thoughts and said to them, “Why are you being so skeptical? 9 Which is easier, to say to this paralyzed man, ‘Your sins are now forgiven,’ or, ‘Stand up and walk!’? 10 But to convince you that the Son of Man has been given authority to forgive sins, 11 I say to this man, ‘Stand up, pick up your stretcher, and walk home.’” 12 Immediately the man sprang to his feet in front of everyone and left for home.

When the crowds witnessed this miracle, they were awestruck. They shouted praises to God and said, “We’ve never seen anything like this before!”

Notice that Jesus saw the faith of the friends and extended forgiveness, but when he saw the thoughts of the haters he brought forgiveness.

← Travel Light: Stuff Out of the Deep →