With the demands of the archery shop this fall, I hadn’t been able to get to the field as much as I would have liked.  However, this week I took off Tuesday and Wednesday, combined with my regular Sunday and Monday off, I was able to spend some quality time in pursuit of a mature whitetail buck.

The timing could not have been better, or the script more exciting.  After, church on Sunday, my wife, my friend Joey and I were headed to stands.  It had been a few years since Joey and I had this opportunity, so we struck out together, while my wife headed to one of her favorite stands on the east side of the farm.  Joey and I were headed to a seam in a hayfield that would permit us to enter undetected.  As, we started into the seam, I spied a giant mainframe 10, directly in our path, tending a doe.  We hit the deck!  I worked my binoculars from my pack, inched up and took a peak.  Yeah… he’s huge!  I gotta try.   I crawled backward to get into a line that offered some concealment.  Joey, provided over-watch as I proceeded to claw my way across the hayfield.  With Joey’s guidance, I managed to make my way to within 33 yards of the monarch undetected.  With him quartering away unawares, I began to draw.  In that instant, I saw a flash to my right, glanced over… busted!  The doe caught me and took off.  I redirected my focus to the buck, who, unfortunately was following suit.  Four seconds… that’s what I needed to seal the deal… four seconds.

I made my way back to Joey, where we shared our exhilaration over what had just happened.  What a charge!  And, we still had our whole afternoon hunt to enjoy!

We saw the buck a short time later, cruising a hayfield across the draw.  To say I hoped he would cruise by my stand would be an understatement.  He didn’t.

The next morning on her way to work, my wife spotted him cruising not far from where I’d seen him the day before.  Due to other obligations, I was not able to get back until Tuesday.  That evening found me in the same area again.  There was amble action and opportunity, but he didn’t make an appearance.  When I was driving back to the house, I came up on him coming out of some standing corn.  “That’s it! I know what he’s doing!”

My full focus is locked on this buck.  In all my years of bowhunting, I’ve only targeted a specific deer 2 other times, now we have #3.  Tuesday evening, I analyzed the terrain between the areas we had seen him.  A clear and logical travel route began to emerge.  Wednesday, I set a new stand in the area I felt could most likely yield an encounter.  The location is great, but the stand not so much.  It’s rather exposed, making movement nearly impossible, but manageable if appropriately measured. The scene is set, now to wait. 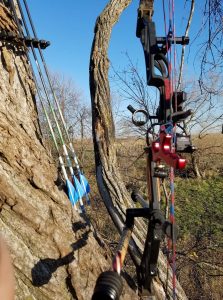 I sat on stand that day for 12 hours.  I saw dozens of deer, had numerous opportunities to fill my tag, including a very nice mature buck, but not the one I was after.  I’m focused now.  Anything less would feel like settling.  It’s not often a bowhunter is presented with an opportunity such as this.  I fell short on the first attempt, but I’m not done yet.

Over the past few days of purposed, focused, determined pursuit and preparation I couldn’t help but compare what I was doing with my focus and pursuit of the Lord. “Am I this focused and purposeful when I comes to pursuing and knowing Jesus?  Do I study scripture with the same veracity that I studied the aerials of the farm?”  At times, yes, but full on continued focus, no would have to be the answer.

If I am able to put everything together and harvest this deer, it would be nothing short of a miracle.  If not for the fortunate encounter on Sunday, I wouldn’t know that he even existed.  I’m focused now, but I haven’t done much leading up to now.  I depend on a long developed knowledge of the area and the animals, never really knowing the exact make up of the bucks from year to year and just trust that a nice deer will cruise by and an opportunity presents itself.  Most the guys I know that consistently tag big mature bucks dedicate themselves to that end.  They are focused nearly always, and put in the work.  The result is they are consistently rewarded.

That kind of focus on God and His kingdom is consistently rewarded.  If you want to be consistently successful, you have to be consistently focused.  In order to wake us up and drive our determination, He’ll occasionally appear to us as a monster 10 point in a hayfield.  And, that works… obviously.  Question is, do you want to see that mack daddy once in a blue moon, or every season?!  Have a blessed weekend!

Matthew 6:33 (NKJV) But seek first the kingdom of God and His righteousness, and all these things shall be added to you.

← Mad Men Thankful for My Spouse →