Endowed By Their Creator

Psalms 33:12 (NKJV) Blessed is the nation whose God is the Lord, The people He has chosen as His own inheritance.

As we approach the celebration of our nation’s independence from the tyrannical rule of Great Britain, I feel compelled to speak on what it meant, and what it means now from a spiritual perspective.

For any who don’t know, I’m a bit of a history nerd.  I never seem to get enough.  In addition to being fairly well read on matters of American history, my undergrad studies were in criminal justice, thus requiring a rather in depth look at constitutional law and the governing structure of the United States.  Consequently, I feel I have a better than rudimentary grasp on where, as a nation, we’ve been, where we’re going and why.

On July 2, 1776 the Continental Congress voted to ratify and issue a proclamation, severing all ties with Great Britain, King George III and Parliament.  This was a complete succession, politically, economically and socially.  The United States of America, declared to the king and the rest of the world its independence and pursuit of self governance.  This was no small matter.  Our founding fathers stood resolute and openly defied the greatest empire and military the world had known.  The men who voted for and signed their name to this proclamation knew the potential cost of such action.  Most of these men were men of means, business men, plantation owners, tradesmen, lawyers, entrepreneurs, clergy.  They had family, property and reputation.  They staked it all on this grand vision, an experiment never before seen in the annals of human history and never since duplicated.  Why?… because they believed.  They believed in something greater than themselves, their children, their wealth and possessions.  They believed, “that all men are created equal, endowed by their Creator with certain inalienable rights, that among these are life, liberty and the pursuit of happiness.”

That belief is the bedrock Truth that our nation was founded upon.  The majority of the men, pivotal in its inception and execution, stood resolutely grounded in faith, guided by God Himself, accepting that which He called them to. Having studied, in depth, the events that transpired throughout the revolutionary years, I am firmly convinced that this nation came into existence solely because of the faith displayed by those men and women of God’s plan and purpose, obedience to that call and trust in His ever present hand of protection.

I hear, quite often, “we need to do something!  We need to push back, dig in and take it back!”  You want to actually do something of consequence?  Put God back in His proper place in the American vision.  That doesn’t start in Washington D.C.  Read about the process that was required to get to a Declaration of Independence.  It didn’t start at the top.  It started in the hearts and minds of the individuals.

You want to see spiritual revival and the regeneration of the bedrock ideals this nation was constructed upon, you start at home.  What kind of leader are you?  What type of christian shadow do you cast?  Are you establishing a Godly presence in your home, for your wife and children?  Are you striving to be provider, protector and priest of your home?  If you’re not, how can you expect to persuade your neighbor to strive for such lofty ideals, your local, state and federal governments?  You can’t!  Revival doesn’t begin in the polls, the statehouses and federal building.  Revival starts in the individual heart!  It spreads, then to the family that you’ve been purposed to guide and protect!  It permeates, then, into the neighborhood, the community, county, state and finally the nation!

Without God as the paramount focus of our lives, this nation can not get back on course.  The faith, courage and foresight we celebrate on July 4th, will be for naught as America becomes another footnote in the history of man. Liberty comes with a price tag, our liberty bought by the blood of Christ, as well as our liberty as a nation.  Our forefathers wrote checks for both, are you willing?  Have a blessed weekend and a safe and joyous Independence Day! 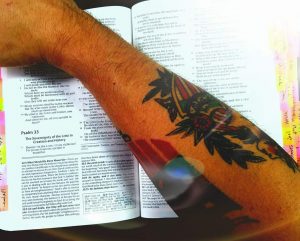 From the place of His dwelling He looks

On all the inhabitants of the earth;

15 He fashions their hearts individually;

He considers all their works.

16 No king is saved by the multitude of an army;

A mighty man is not delivered by great strength.

17 A horse is a vain hope for safety;

Neither shall it deliver any by its great strength.

18 Behold, the eye of the Lord is on those who fear Him,

On those who hope in His mercy,

19 To deliver their soul from death,

And to keep them alive in famine.

20 Our soul waits for the Lord;

He is our help and our shield.

21 For our heart shall rejoice in Him,

Because we have trusted in His holy name.

Just as we hope in You.