Have you ever stayed up at night because of a problem you are facing?  I know I have several times.  We hear a doctors bad news, a fight with family, a policeman who hands you a document, a moment that changes your life. In that moment, you feel completely vulnerable.  You have no idea how you got where you are and worse yet no idea how to move forward. 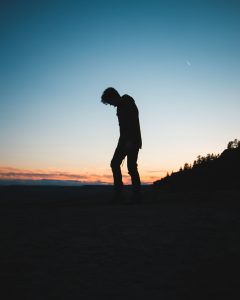 I just had my fourth kid.  No I am not amish… Someone asked me recently what it is like having your fourth kid.  I said imagine you are drowning and then someone hands you a baby.  Johna, my wife, had a c section and cant drive, pick up anything of size, and has 3 other kids that want her constant attention. I have two jobs and a growing family, and I do not want to drop the ball in any of those arenas. It feels like a giant in front of me.  I know it is bigger than me and could easily crush me.

David was a young teenager when he faced Goliath. Goliath was a man of war and David was a shepherd.  Goliath saw just a boy.  Little did he know that this boy had killed a lion and a bear already.  David knew what God could do through him.  David knew the lion and the bear should have killed him, but they didn’t. He was familiar with feeling small compared to his problems and knew first hand that God could deliver him.

We see David stand up to Goliath with such tenacity and audacious confidence, that he almost see like a Marvel superhero. Here is how David stands tall before Goliath:

1 Samuel 17:45 David replied to the Philistine, “You come to me with sword, spear, and javelin, but I come to you in the name of the Lord of Heaven’s Armies—the God of the armies of Israel, whom you have defied. 46 Today the Lord will conquer you, and I will kill you and cut off your head. And then I will give the dead bodies of your men to the birds and wild animals, and the whole world will know that there is a God in Israel!

David understood something I want all of us to understand.  David knew Goliath was greater than him.  He also knew the God inside of him was greater than the giant in front of him. All of us have problems that stand in front of us and remind us how small we are in comparison.  So this is our confidence, God is greater!  He is greater than cancer, divorce, addiction, depression, loneliness, family tension, death, and sin.

So what are you facing today that cause you to worry or walk in fear?  Look that problem in the face and remind it that the God in you is greater than it is.  Speak it out loud. Write it down. Shout it from the rooftops!