Light in the Darkness

Christmas is full of emotions for everyone.  There is mistletoe and eggnog.  There can be new people at the Christmas table that come in small packages. There are gifts and lots of food. At the same time this day can be full of lots of different emotions.  There are people who used to be at the table that are not there anymore. There might not be anyone at the table. Some people at your table might like Trump while others don’t. Some want to save whales and some want to kill whales.  Some you just hope don’t sit next to each other at the table. Lets be honest, Christmas stopped being the happiest time of the year when our eyes were opened to the reality of this world isn’t puppy dogs and roses.

When Jesus was born, angels, shepherds, and kings came to worship him.  Over 300 prophecies where fulfilled and satan had his head crushed. In the midst of this glorious moment, a sub plot that was incredibly dark was playing in the backdrop. Jesus was born as an infant to a middle class family in what appeared to be a scandal.  Who believed the pregnant engaged couple was actually a virgin birth? He was born in a barn while a lunatic king made every effort for his death.  Roman soldiers killed every male child under the age of two.  Every family was effected and grieving. Jesus was a constant reminder of the one male child that was not murdered. 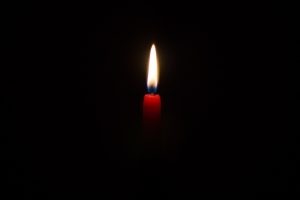 Christmas is not a reminder that the world is a really nice old place, it is a place where wickedness flourishes unchecked, where children are murdered, where civilized countries make a lot of money by selling weapons to uncivilized ones so they can blow each other apart. Christmas is God lighting a candle; and you don’t light a candle in a room that’s already full of sunlight. You light a candle in a room that’s so murky that the candle, when lit, reveals just how bad things really are. The light shines shines in the darkness, says St John, and the darkness has not overcome it.”- NT Wright

So maybe your day is full of light or maybe it is full of darkness, either way Jesus came to shine a light in your darkness.  Today is a day to remember, that after the gifts are opened and coffee is brewed, to take time to invite the King, who left his Heavenly throne, to shine a candle to give you hope in the darkness.  Spend some time today thanking God for His light.