On Memorial Day, my wife, my brother and I watched “Patriot Day”.  For anyone who has not seen it, or doesn’t know the story line, it centers around the Boston marathon bombings.  These bombings were a senseless tragic attack spawned by hatred.  The soul intent was terror and anguish.

As I watched this movie, I was shocked (all over again), saddened, pained but mostly angered.  My blood pressure jumped up a few notches, to say the least.  As events ran their course, and they were closing in on the perpetrators, my anger was shifting to vengeance, retribution.  I wanted to see equivalent amounts of pain and terror inflicted on these men, an eye for an eye.  For one of them that’s what he got.  I almost jumped out of my chair and cheered. 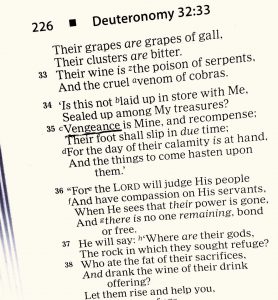 It took a couple days, but I began to evaluate my response to what I saw, to those men and the evil that they unleashed.  I was disturbed and convicted by my desire to see pain inflicted on those men.  Vengeance, that’s what I wanted… blood.  That’s wrong.  Period.  That is not what justice looks like.  What those men did was wicked and horrific.  They became the manifestation of evil, in the plainest sense of the word.  However, to wish vengeance, retribution and retaliation on them, blood and carnage, is wrong.   Some would say, “turn about is fair play.”  I would say, “naturally!”  Jesus would say, “you are no longer a natural man.”

Romans 12:21 (NKJV) Do not be overcome with evil, but overcome evil with good.

God would see us pity those men for the evil that enveloped them, be saddened for them, pray and bless them.  He would have us pour out love and compassion for the victims of their actions, the bombing, as well as the ancillary physical and emotional casualties inflicted.

This is not a call to simply lie down and allow evil to have its way, free from consequence or defense.  There will be times when corrective action, the laying on of “hands”, if you please, is necessary.  There will be times when one must rise up and beat back evil manifested in another to protect oneself or others.  Justifiably so, however, guard your heart.  “Do not be overcome.”  The motivation, the condition of your heart in such cases, is what scripture directs our focus to.  There will most assuredly be times when justice is required for evils perpetrated.  Be careful, for bloodlust and retaliation is born from the very same evil.  Vengeance and justice are not interchangable.  People will wrong you, be sure of that.  I pray that none of you ever experience the level of tragedy wrought upon the people of Boston that day.  Regardless of the level wrought, respond from the unnatural position that God has called you to.  It will be easier said than done, but Love first. Have a blessed weekend.

Romans 12:17-19  (NKJV)  Repay no one evil for evil.  Have regard for good things in the sight of all men. 18 If it is possible, as much as depends on you, live peaceably with all men. 19 Beloved, do not avenge yourselves, but rather give place to wrath; for it is written, “Vengeance is Mine, I will repay,” says the Lord.