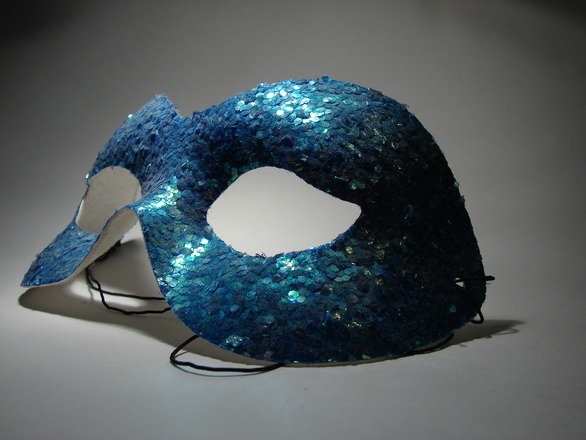 I’m typically not a costume guy, but this year I got asked to portray Darth Vader in a program at church. The day of the dress rehearsal I put the Darth Vader costume on for the first time, including the trademark ominous black mask, it was as if I was transformed into someone else. I spent the morning running around seemingly uninhibited, scaring people, being silly, doing weird voices, and having way too much fun. That silly $30 costume seemed to transform me into someone completely different for a few hours.

This got me to thinking about the “costumes” we put on in life. We often pretend to be something we really are not. As men we often embellish our athletic accomplishments, trump up our finances, and exaggerate our successes (unless you all really do have an 18 point buck and a 118 pound bass hanging in your living room). At the very least I think most of us try to portray ourselves in way that are not necessarily who we are. I’ll admit that I sometimes fall into portraying myself as someone who has his family, personal, and spiritual lives substantially more together then he really does. It’s a costume I put on to both impress others and to hide from some of the imperfections of my life.

A great example of this practice can be seen in the life of Jacob. Jacob was always obsessed with having the rights of the first born son. Even in the womb he was wrestling with his brother Esau for the honor. As they grew older he conspired to steal his brother’s birthright and inheritance by dressing up as him to fool their aging father. He succeeded in stealing the birthright, but did not get to enjoy it. Instead, he spent the next 20 years on a panicked run from his brother. He thought his disguise had gotten him the worldly thing he so desperately wanted, but in the end it did not bring him the joy or happiness he was looking for.

Let me be rather blunt. God cannot bless who we pretend to be, He can only bless who we truly are. We can spend a major chunk of our lives trying to impress others by projecting a certain image of who we are. In the end, however, thats all just a fancy costume that God sees right through. It’s not who God made us to be and who he wants to use to impact the world. Paul tells us this in Ephesians 2:10: For we are God’s masterpiece. He has created us anew in Christ Jesus, so we can do the good things he planned for us long ago. We need to stop putting on costumes to try to impress the world with some fake version of us. Instead, we simply need to embrace the masterpiece God created us to be, trusting that God will work in us and through us.