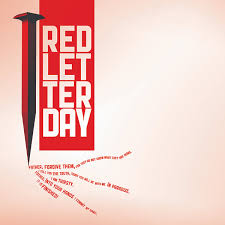 This lent we are walking through the final words that Jesus uttered before dying on the cross for our sins. We find today’s words in the heartwrenching story found in Luke 23:32-34.

Two others, who were criminals, were led away to be put to death with him. And when they came to the place that is called The Skull, there they crucified him, and the criminals, one on his right and one on his left. And Jesus said, “Father, forgive them, for they know not what they do.”And they cast lots to divide his garments. Luke 23:32-34

While I have never suffered anything in the ballpark of crucifixion, I have had a couple of scary moments in my life. One was in a triathlon in Chicago, with an open water swim in Lake Michigan. The water was 59 degrees with 20 mph winds, which made for extremely hazardous conditions. To top it off, it was a pier start, meaning your body has no time to acclimate to the water. About 30 seconds in I switched from trying to achieve a good time to simply attempting to make it out alive! Another scary moment was when our family flipped our SUV on our way home one Christmas. We spun out of control long enough, and flipped enough times, for me to realize this could be it. It was a pretty scary moment.

Notice what I thought about each time? Myself. Maybe in the back of my mind my family was there, but I was pretty much concerned with self-preservation. Contrast that with Jesus. What is he concerned with as he dies an excruciating death on the Cross? Forgiving others. In the midst of all that Jesus is concerned with others receiving forgiveness. Yet, many of us (including this writer), struggle to forgive others in substantially less trying circumstances. We have a harder time forgiving someone who cuts us off on the road or, even worse, violates the sacred rules of the Oskaloosa McDonald’s drive-through lane (I have not been there for five years, but drive-through budgers drive me crazy!). Yet God, who created our world perfectly, and watched our sinfulness mess it all up, was willing to suffering and die so that we may be forgiven. If God can forgive, why can’t we?

I really encourage you today to take a few minutes to forgive someone you’ve not yet forgiven. Maybe it’s for something that happened yesterday, or something 30 years ago. Let’s not forget Christ’s example this lent, and instead forgive those who have wronged us.