Serving can be a Sufferfest 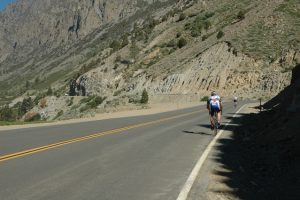 Four years ago I started getting into competitive cycling. I’ve been involved in competitive sports and activities all my life, but something has really struck me about the world of cycling: it is overtly fixated on suffering. Never before had I seen suffering elevated to such a lofty status. You can’t listen to coverage of the Tour de France without hearing commentators wax poetic about suffering. Suffering and success seem almost synonymous in the cycling world. In fact, a wildly popular online cycling training program is called Sufferfest. A winning cyclist would never say that a ride was good, fun, or successful, rather they would say “I really suffered out there today.” Why such a focus on suffering? Because in a cycling race the goal is to push your body to exert the most amount of energy possible over a course of roughly 100 miles. That will inevitably lead to A LOT of suffering: legs will ache, lungs will seemingly give out, and one’s body will want to shut down. A good cyclist endures a huge amount of suffering in order to emerge victorious.

In our Christian walk, however, there are probably few terms more negative then suffering. We tend to think of suffering as something that happens when we do not follow God’s ways, or when Satan’s gaze is honed in on us. Yet, much like a competitive cyclist, a hard-working disciple of Christ WILL ENDURE SUFFERING. It’s simply fact. If you serve in a church you will endure suffering: conflicts, tragic deaths, an unresponsive audience, an unruly Sunday school class, a poorly received budget report, etc. If you are working to reach the unreached you will experience suffering: you will be rejected, God will be rejected, people will backslide, etc. So, you better face it: if you want to serve God you better be willing to suffer. But, here’s the good news: when we experience suffering because of our service for God it is, like in cycling, not for nothing. Romans 5:3-5 tells us: we also rejoice in our sufferings, because we know that suffering produces perseverance; perseverance, character; and character, hope. And hope does not disappoint us, because God has poured out his love into our hearts by the Holy Spirit, whom he has given us.

Now look, don’t run outside today and start beating yourself with a bat so you can experience the glory of God. What Paul is saying is that when we strive hard for Christ we will inevitably encounter suffering. But, instead of throwing our bike and going home, we plow through the suffering with the knowledge that our hard work and perseverance will bring glory to God. Serving will always have its rough spots, but it will also have its moments of victory: the unruly student accepts Christ, a family is comforted amidst unimaginable tragedy, and the rejected come to be part of God’s family. Keep pedaling through the struggles for God’s Kingdom!