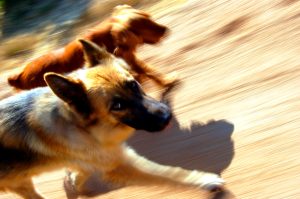 As a runner, I’ve developed a steady pace over the years, so much so that I no longer wear a watch. I can look at the clock when I leave the house, and typically I am within a minute or so of the same time everyday. There are exceptions to this, and they are typically because I am being pursued by something. Some times my pursuer is rain, and I end up sprinting the final stretch to avoid being soaked. Last week it was a van with a loudspeaker on it (a fairly typical type of advertisement here). This van was going about the same speed as me on a parallel course advertising for a circus. The circus advertisement was 15 seconds, followed by playing the most annoying Spanish Christmas song for 45 seconds. I about ran a personal best trying to outrun that song! Another common pursuer has been dogs. I have received several bites over the years, experiences I hope to forever avoid. That is until I learned a really important lesson. The best way to deal with a chasing dog is not to run faster, but to stop running. If you run you are basically encouraging the dog to chase you. If, however, you stop, the dog will also stop. I have saved myself a lot of sprinting, and likely a number of bites, by learning to just stop.

Where shall I go from your Spirit? Or where shall I flee from your presence? If I ascend to heaven, you are there!
If I make my bed in Sheol, you are there. If I take the wings of the morning and dwell in the uttermost parts of the sea, even there your hand shall lead me, and your right hand shall hold me. If I say, “Surely the darkness shall cover me, and the light about me be night,” even the darkness is not dark to you; the night is bright as the day, for darkness is as light with you. Psalm 139:7-12

Stop running from God in various parts of your life. Instead, listen to His teachings. Yes, sometimes listening to God can seem challenging, even dangerous. However, where better to be then following in God’s footsteps? Stop running, and start trusting and following the plans of the Lord.

← Happy New Year from Mike and Brandon Another Day →