The Shadow of Death

Last week, we are outside on a beautiful Florida winter day, Johna and I are talking while watching the kids play.  The big kids have neighbors over and are playing kick the can.  Praise God for games that keep them from a television screen playing video games.  Yes kick the can is still the best backyard game when you have kids of all ages.  While the bigs were playing an intense game of kick the can, that yes still ends in tears as the rules change every time they play, my two year old Eliana discovered her shadow.  I can only imagine what happens in the mind of a toddler when they see this dark image on the ground that seems to follow them everywhere they go.   The image at first startled her, and then she just stared at it.

Psalm 23:4a Yea, though I walk through the valley of the shadow of death.

David writes this psalm as he is leading sheep from one valley to another and has to pass through what is called “shadow of death.”  It is a dangerous ravine that has earned its name.  David does not see his own shadow but that of the high cliffs reminding him that if danger approaches he has nowhere to go.  The shadow is a constant reminder that his problem is so much bigger than him!

All of us find ourselves at times intimidated by the shadow of what could be. Fear has a way of causing our heart to be crippled. I know right now there are a lot of shadow.  What if I can’t find a venue?  What if the government shutdown keeps the IRS from approving my accounts?  What if no one comes to our start up parties?  What if no one comes to our church?  What if we don’t make it?  Will there be enough for my family after we launch and the church is my only income?

Your shadows probably look different? Will there be enough to make payroll this week?  Can my marriage survive?  Will I always have this addiction?  Will they show up?  Will I have a job next month?  What will the doctor say if I go see him?  Will the treatment work? Do I have what it takes?  Am I enough?

It is easy for our eyes to get fixed on the shadow of what bad things could happen.  David shows us another way.  He knew that a shadow had to have light.  He knew if he took his eyes of the shadow and onto the light, he would live differently.  Here is the rest of that verse:

Psalm 23:4 Yea, though I walk through the valley of the shadow of death,
I will fear no evil;
For You are with me;
Your rod and Your staff, they comfort me. 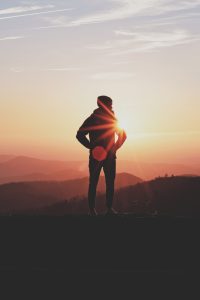 Jesus paid way to high of price for us to let the shadows of our lives cripple us.  God is with you.  He had not abandoned you.  You have not sinned too greatly. You are not too far gone.  So turn your eyes from the shadow to the Light.  The Light has already overcome your shadow!