I was at the gym last week, and noticed someone “working out.”  I wish I could emphasized the quotations. They were in the gym, they got on a machine, they touched the weights.  When I looked into their effort, to say it was lacking would be a massive understatement.  They could be there for hours seven days a week and not gain any growth or loose any weight. Why… “this isn’t working” 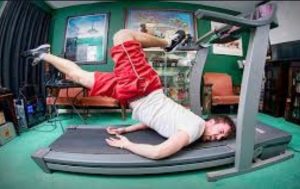 The equation above: failed system + unmet expectations= frustrated person in the gym

Mark 3:1 Another time Jesus went into the synagogue, and a man with a shriveled hand was there. 2 Some of them were looking for a reason to accuse Jesus, so they watched him closely to see if he would heal him on the Sabbath. 3 Jesus said to the man with the shriveled hand, “Stand up in front of everyone.”

4 Then Jesus asked them, “Which is lawful on the Sabbath: to do good or to do evil, to save life or to kill?” But they remained silent.

5 He looked around at them in anger and, deeply distressed at their stubborn hearts, said to the man, “Stretch out your hand.”

We would like the verse to end like this… “and his hand was completely restored, and he stretched it out.” But it is actually in reverse…

Mark 3:5 He stretched it out, and his hand was completely restored.

It was when the man obeyed Jesus command that his hand was completely restored. What if obedience comes from obedience that is done from courage aka faith. What if faith was not a feeling but obeying before what could only be understood or realized after.

Jesus saw a failed religious system.  You could not heal on the sabbath because it was considered work.  Jesus did not pull him to the side to heal him, but had him stand up in front of everyone. This unnamed man was identified only by his issue and not his family name or first name.  Why? His issue was not about him. Your issue is not about you!  Jesus went public with the mans issue so all the people around him could see the issue and the healing.

Where is God asking you to obey in your issue? Confess it? Let people into it? What if tithing was how God wanted to give you the financial freedom you are looking for?  What if forgiving them was the obedience God is looking for to heal your depression?  What if serving in the midst of your busy schedule was the place where your faith would become real? What if waking up 45 min early was the obedience God wants to have a real relationship with Him?

Where is your issue? What is your next step of obedience?