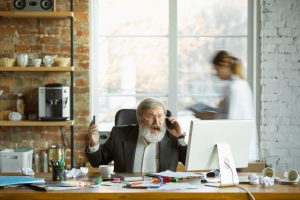 The Book of Numbers, admittingly, does not make for the most riveting reading. If you start from the beginning, it becomes excruciatingly clear why it’s called Numbers, as it appears to be simply a catalog of the Israelites and their possessions. Near its middle, however, things take a brief turn. Chapters 11-14 move from cataloging to focus on a theme that remains extremely relevant today: grumbling. In the months preceding the events of Numbers 11-14, God interacted with His people in miraculous ways. He spoke to Moses through a burning bush, brought about plagues to secure release from Pharaoh, parted the Red Sea, guided them by a pillar of fire, and provided water out of solid rock. Despite having witnessed God’s power, love, and mercy in such supernatural ways, these four chapters focus on how quickly the people began to be ungrateful, leading to numerous problems (including their wandering the wilderness for 40 years). Today I want us, as Christians, to ask ourselves the question: is there too much grumbling in our lives?

Take a look at how all of this grumbling got started:

Now the rabble that was among them had a strong craving. And the people of Israel also wept again and said, “Oh that we had meat to eat! We remember the fish we ate in Egypt that cost nothing, the cucumbers, the melons, the leeks, the onions, and the garlic. But now our strength is dried up, and there is nothing at all but this manna to look at.” Numbers 11:4-6

The rabble refers to a group of non-Hebrew people who followed the Hebrews out of Egypt. They were non-believers who simply saw that the Hebrews were escaping Pharaoh and decided that sounded like a good idea for them too. Once things got a little difficult, however, this rabble was quick to start grumbling. Now, it is understandable that these people, who were in it only for their own benefit, would start complaining when the going got rough. More surprising is that the God following Hebrews started grumbling as well. The self-centeredness of the rabble spread via grumbling like the flu spreads via a sneeze. Pretty soon much of Israel is begging to return to slavery in Egypt and cursing the God who rescued them.

Today there is no shortage of “rabble” whose grumbling can make us lose sight of the goodness and faithfulness of God. They abound on TV, social media, and seemingly everywhere else. Grumbling and anger have almost become desired emotions in our culture, even though they cause us nothing but pain. Grumbling has so infected us that churches are far too often as much houses of grumbling as they are houses of worship. We were, however, created and saved for something so much greater than grumbling and negativity. Instead of spending so much of our lives grumbling, we need to take time to remember and celebrate the goodness of God. We need to remember that God created us, saved us, is with us, and has promised us an eternity with Him. Like the Hebrews before us, we have so much to worship God for. Let us not get lost in the grumbling of the rabble but instead remember the goodness of our awesome God.

← Two Ears, One Mouth Put your heart in it →