I had drafted this week’s commentary and had it ready to post.  However, as He does on occasion, God brought something else to my attention and has compelled me to share it instead.

I preface what I am about to address with a statement;  I have had a fairly good and reasonably easy life.  In comparison to a great many I know, mine has been an easy row to hoe.  So, with that said, today’s is a commentary based in observation and scriptural application, not one born of personal experience.

We had a guest speaker tonight at church.  A gentleman by the name of Jeff Stultz, from North Carolina came to share his personal testimony and give us a glimpse into the path he has traveled in this life. 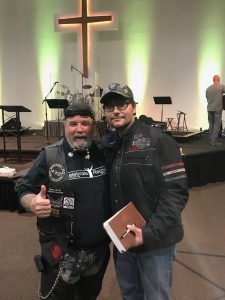 Before hand, he stopped by the Harley Shop and I was privileged to have an opportunity to spend a brief but rewarding time getting to know a bit about and share some things with him.  For the sake of space, I will not go into great detail, let me just say, Jeff has lived a very dangerous, difficult and tragic life, a great deal of which was his own doing.  His testimony can be found at www.motorcyclemissionary.com, and I would strongly encourage you to read it.

I’ve known a number of people that have walked a path very similar to Jeff’s.  People who have lived lives of addiction, violence, crime, selfcenteredness and destruction.  I’ve known people who have been on the receiving end of people living as Jeff lived.  I’ve known people who have lived through lives of struggle and heartache, told and untold horrors,  by no fault of their own.  My wife, bless her heart, comes immediately to my mind. Whatever the circumstances surrounding the pain and suffering, it’s tragic.  Though, not having experienced anything even remotely comparable, I can scarcely imagine what it is like.  My heart goes out to them.  I want to say that’s horrible and no one should ever have to endure a life like that.

As we talked, I found my thoughts drifting to another perspective.  I found myself praising God for walking Jeff down the road He did.  I certainly would never wish for anyone to go through and put others through what Jeff did.  I would never want to see anyone go through any of the multitude of anguish I know others have endured.  Yet, praise God that those people did.

As Jeff and I conversed about that perspective, drawing from memory he immediately recited Genesis 50:20 But as for you, you meant evil against me; but God meant it for good, in order to bring it about as it is this day, to save many people alive. (NKJV)  There’s our reason for praise!  Though we would never want to see someone afflicted in such ways, nor if we’re being honest, choose to be plagued with such, but… what if they or we never?

If Jeff or so many others had not been walked down the road God had set forth for them, been tried, tested and tempered by fire, He could not use them for the work He had prepared for them beforehand.  How many people have been brought to the foot of the cross by the witness that Jeff and so many others testify to?  Through baptism by fire, how mighty are these testimonies of restoration, endurance, God’s eternal grace and His miraculous hands of healing?!

Ephesians 2:10 For we are His workmanship, created in Christ Jesus for good works, which God prepared beforehand that we should walk in them.

Whether our choices led us down the path or the path was directed by circumstances beyond our control, there is peace in the knowledge that God holds the map.  Though it maybe painful, unfair, even horrific, through faith in God we can praise Him for it, it’s effect on us and the fruit that He would have it produce.  We each have our own stories and men and women like these have been purposed by none other than God Himself, to reach those who could not be reached by people who’ve walked paths similar to mine.  Praise God for that!!!  Have a blessed weekend.