What are you Chasing? 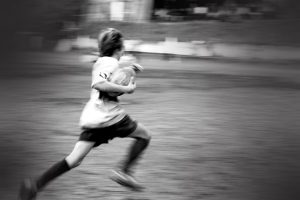 As I write this, the news is filled with discussion of the chase to win the Super Bowl. Both teams, the Bengals and the Rams, are somewhat of a surprise, and the storylines are certainly intriguing. You have Joe Borrow, the charismatic young Bengals quarterback, chasing his first ever title and perhaps taking the first step in the chase to become an all-time great. You have Rams quarterback Matthew Stafford, chasing a championship and personal recognition after years toiling away with the perpetually unsuccessful Detroit Lions. As I’ve heard and read story after story of these teams, players, and coaches and the championship they are chasing, I was reminded of the things we as men often chase throughout life. Be honest with yourself: what are the two or three things you are putting the most time and energy into chasing? Don’t just give the “Sunday School” answer, but answer truthfully. What are you chasing after in life with the majority of your time, talent, and treasure?

For many men, high on the “chase” list are things such as career success, relational success, having a great home, having recreational “toys” (boats, guns, bikes, RVs, etc.), etc. Most of the things we chase tend to fall into the categories of personal successes and “stuff.” Are those the things that we should spend a huge amount of our lives chasing? Now look, I am not asserting that success and material things are inherently bad. What I am suggesting we reflect upon is if our chase for those things keeps us from chasing adequately chasing after God.

In Luke 13 Jesus tackles this question of what we should be chasing. It starts with a question over inheritance:

Someone in the crowd said to him, “Teacher, tell my brother to divide the inheritance with me.” But he said to him, “Man, who made me a judge or arbitrator over you?” And he said to them, “Take care, and be on your guard against all covetousness, for one’s life does not consist in the abundance of his possessions.” Luke 12:13-15

Jesus is saying: don’t primarily chase after possessions. Indeed, guard against having an attitude of covetousness, which often fuels our worldly chases. That’s often our problem. We see the possessions, success, and apparent happiness of others and think “ I need that too.” We constantly chase after all these things the world tells us are important, instead of chasing what is really important: God and His purpose for us. Look at what Jesus says will happen when we make chasing after God (following Him) our focus: Instead, seek his kingdom, and these things will be added to you. Luke 12:31

So, what are you spending your time, talent, and energy chasing after? Is it worldly, or is it Godly? As we move forward, I pray all of us may trust God and chase after Him with all that we are.