Genesis 1:26,27 (NKJV) Then God said, “Let Us make man in Our image, according to Our likeness”…So God created man in His own image; in the image of God He created him; male and female He created them.

From before your conception, to the beginning of human history, you are stamped with the nature of God.  We all are.  From Adam and Eve to present and future generations, we all have that distinction. There is not another one of God’s creations upon which that stamp is placed.

So, we are created in His image for His purpose, but as we know, because of sin, we require refinement to achieve this purpose.  Fortunately, God is in the human development business.  We have a purpose, a potential to aspire to, but it will take time, patience, devotion and the loving hand of God.

I can assure you, there has never been a human being spontaneously propelled to their peak potential from the moment of birth or rebirth in Christ Jesus.  It takes time, devotion and patience.

Don’t believe me?  Let’s take a look at David, the man after God’s own heart.  David is the only man from scripture who owns that epitaph.  King David, Israel’s mightiest, yes?  A warrior king, David elevated Israel to the position of THE world superpower.  In scripture, David is written about more than any other person of the Old Testament (66 chapters in the Old Testament and 59 references in the New Testament).  A great man, yes?  A righteous man, yes?  But, developed by God to his full potential.  First and foremost, a faithful man, yes?  Through his faith and devotion, he allowed God to work in Him who God would have him be.

Anointed at around 16 years of age, David did not rise to the throne of Judah until the age of 30 and then later over all of Israel.  He endured intense trial and tribulation, but with a faithful, obedient heart he allowed God to develop his potential, always seeking first, the heart of God.  When God had finally developed David into the man He desired him to be, He unleashed him on the world at His time, for His glory.  The fruits of David’s potential spread through the whole of the region.  It lead to a spiritual revival, birthed the Mighty Men of David.  His line established as the line from which Jesus would arise.  His impact still bearing fruit to this day.  David’s potential developed and realized by God, for God’s glory.

Ephesians 2:10 (NKJV)  For we are His workmanship, created in Christ Jesus for good works, which God prepared beforehand that we should walk in them.

How many christians throughout history, have left this earth for their heavenly home, never realizing the potential and purpose God set before them?  We are all gifted with a divine purpose, with a potential that God would see developed, refined and unleashed for the betterment of humanity.  Ask yourself, are you seeking God’s heart, His purpose for your life?  Are you faithfully seeking, learning, listening to all God has for you to do for Him?  Are you asking, “God what would you have me do, who would you see me become”?  Then…are you listening for the answer?  There are a great many disciples of Christ in this world, but ask yourself the question, “what am I doing with it?” 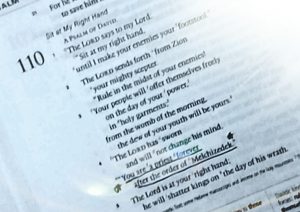 Remember, this is a process.  Just as David was not instantly transformed, you will not wake up one day, profess Jesus your Lord and Savior, and instantly be propelled to this fullness of potential.  It is a continual work.  It requires patience, discipline, obedience and unwavering faith.  From David, a shepherd boy, ordinary  and overlooked by those around him, God created a warrior king to rule in His righteous glory.  He created a king from whom mighty men were produced.  God wants to turn the ordinary into the extraordinary.  But… you have to want it too.  You have to yearn to know and follow God, to burn for Him.  God wants His church to be filled with heroes! Have a blessed weekend.

James 1:22 (NKJV)  But be doers of the word, and not hearers only, deceiving yourselves.