“You’re not qualified.”  I’ve heard that said, many times.  In fact, I been hearing it quite a bit recently.  I bet each and every one of you has heard that or some equivalent of equal effect.  “You’re no good.  I know who you were, what you’ve done.  No…what you are!  What give’s you the right to say anything?!”  That’s it, isn’t it?  That’s the narrative that the ruler of this world drafts and delivers to us every day.  It’s the antithesis to the narrative God has drafted for us, I think most of us recognize that and yet, we choose to listen and believe.

Judges 6:15 (NKJV) So he said to Him, “O my Lord, how can I save Israel? Indeed my clan is the weakest in Manasseh, and I am the least in my father’s house.”

The genius in satan’s tactic is not found in the lie, but rather the truth.  The truth is, yes that is who I was.  I did those things.  I continue to muck things up.  I fall short in this area and in that.  I’m not qualified.  Satan wants me to stare at and focus on those truths, blinding me to God’s reality, His narrative drafted specifically for me.  He wants me doubting and riddled with shame.  God has a hard time using a person trapped in guilt and shame.

Those statements about me are true, but it’s a trap.  It’s a trap in that God has rendered all of that irrelevant.  That may have been who I was, what I’ve done and no, I wasn’t qualified, but Jesus Christ my Lord, my Savior tells me that is not who you are!  That man is dead for He has created in me a new man, born again through His loving sacrifice, His grace.  He qualifies me, He justifies me and His Holy Spirit, gifted to and living in me, sanctifies me! That my friends, is the WHOLE truth! 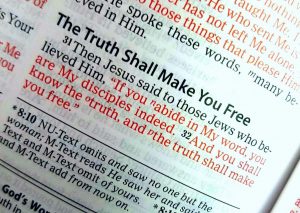 Satan wraps up all his garbage, a hook, with the bait of a bit of truth, to get you to bite, then he reels you in.  He wants you to be so caught up in trying to resurrect the corpse of the man that Jesus put to death for you, so that the life of the new man born again in Jesus Christ is ineffectual.

These lies, these taunts from hell have pulled at everyone at one point in time or another.  Just look at scripture; Abraham, Moses, Gideon, Jonah, David, Solomon, Peter and on and on and on.  Godly men.  Yet, each one of them when tasked and purposed by God, stumbled and believed the lies. “Not me, I can’t speak.”  “My family is nothing and I’m the lowest of them all.”  “God has no use for a man such as me, surely it’s a mistake, Lord.  Please, go and find another.”  These are, in effect, things spoke by the men I mentioned above.  More importantly, though, I’m betting they’re words you’ve said as well.  I know I have.

The only way to drown out the lies, to cast them upon the ash heap, is to faithfully pursue the truth.  Scripture, God’s holy word is your weapon.  God will go with you.  He went with those men I mentioned.  Once they let go of the lie, cast aside hell’s narrative, they could see and believe God’s narrative, His reality,  VICTORY!!!  Have a blessed weekend.

Judges 6:16 (NKJV) And the Lord said to him, “Surely I will be with you, and you shall defeat the Midianites as one man.”