A Tale of Two Kales 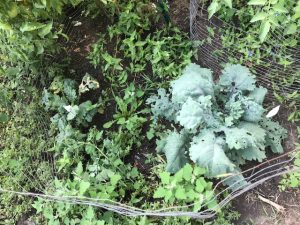 Sometime in June, I was at the garden center with my kids and since things were discounted ½ off, asked them what we should get.  We got flowers for mom and a 4 pack of kale for 75 cents, which isn’t a huge gamble, even if you don’t like kale.  We planted two in a pot next to our house and two near our tomato garden at another location in town.  Since they are right next to each other, they got watered and cared for at about the same times, whenever that happened to be.  After a rabbit started eating on them, they were both fenced in at the same time also. If you are like most people, you would probably say, ‘Did you really need that much kale anyway?’   Well, recently I started noticing one doing much better than the other and I thought it odd, since they both came from the same batch and were cared for the same way.  Could being two feet away in the same soil make that much difference?  The only real difference I could tell was that one got a little more shade in the late afternoon than the other did, which I would think would help it on really hot days. So, I guess there are no guarantees in gardening, as in other areas of life.

Blessed is the man who trusts in the Lord, whose trust is the Lord. He is like a tree planted by water, that sends out its roots by the stream, and does not fear when heat comes, for its leaves remain green, and is not anxious in the year of drought, for it does not cease to bear fruit.  Jeremiah 17:7-8

When we look at all we do for our children…we feed them, we care for them, we teach them, etc, all in hopes that they grow up to be competent, productive, if not nearly perfect adults.  Well, we don’t have to look far, in fact in our own families, to see that children who have been provided the same environment growing up can turn out vastly different, due to a variety of reasons, not all of which are within our control.  Some families grow up in the church and have some children remain and yet others may walk away.  Some may grow up hearing little if any scripture and make some bad life choices and come to Christ, regardless.  So, even within God’s family, there are no guarantees either, but does that mean any of our actions are futile?  Obviously not.

Blessed is the man who walks not in the counsel of the wicked, nor stands in the way of sinners, nor sits in the seat of scoffers; but his delight is in the law of the Lord, and on his law he meditates day and night. He is like a tree planted by streams of water that yields its fruit in its season, and its leaf does not wither. In all that he does, he prospers.  Psalm 1:1-3

Several years ago, I put a rhubarb plant in the ground and each year it started well, but withered by the time mid-summer arrived and died off.  After three or more years of this, I transplanted and fertilized it in a new location and while it hasn’t thrived, it has done much better in that environment.  There are things within our control that we can do for out children and others around us to encourage spiritual growth.  We can pray and read the bible within our family and live out the life of a christian before them and while it may not always keep them from straying, they will have these things in their head and hearts and will be grounded in their faith.  The same can be said of us as well.  When we are watered and fed with good spiritual food, we thrive, but when these are absent, we can start to wither as well.  Are you allowing  yourself to be cared for by the Good Gardener?

I am the vine; you are the branches. If you remain in me and I in you, you will bear much fruit; apart from me you can do nothing..  John 15:5

← Why God sends a Battle- Part 3 Headed Out Solo →