You MUST Live There

From time to time, I’m inspired to revisit the archives and bring back a prior writing.  I’m going to do just that, today.  Pastor Kevin Corver’s, of Third Reformed Church of Pella, latest sermon series provided the spark to share this past writing with you.  If you haven’t heard the past two Sundays, I would encourage you to go to their website and watch them.  His series has been addressing how our attachments shape the way we think and perceive the world around us.  It highlights the essential need to draw focus to Christ and pursue closeness with Him.  I felt like this particular writing might serve to provide a visual reference to how that pursuit and closeness might be realized.  I wrote this back in 2017 and later developed into, what would be, the first sermon I had the privilege to share.

I John 2:28 And now, little children, abide in Him, that when He appears, we may have confidence and not be ashamed before Him at His coming.

Every year, when I strap on my pack, grab my bow and disappear up some distant mountain side, I’m rusty.  I’ve spent the past 50 weeks at 800 feet elevation, generally within a stone’s throw from a roadway and mere walk to the fridge for food.  My senses do not need to be razor sharp for me to get through the day to day.  Now on the mountain, different story.  Each year, it comes back to me a little easier, but nonetheless, it takes some acclimation.  What it requires is a total immersion.  I must dive off into that environment, smell it’s smells, hear it’s sounds, feel it, taste it… live it.  There’s the key… I must live it.  I must abide in those surroundings, among the wild things before I can really start to get in tune, to think and anticipate as is necessary to be successful. 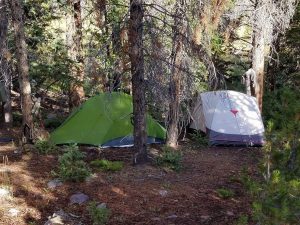 During my Wednesday evening men’s group, one of the guys spoke about some of his struggles and frustrations following Jesus.  He stated, at times he thinks about how much easier aspects of his life were before he knew the truth of the gospels.  Before he “knew”, there were areas of his life, thanks to prior oblivion, he could just sail through and not have a moment’s pause.  Now, it can be a struggle, stressful.  Another thing he expressed was frustration and impatience in hearing from God.  We talk about hearing God’s still small voice, guiding, encouraging and correcting us.  My friend said he struggles with that, discerning God’s voice in his day to day walk.  He said he wishes God would just shout His desires, get His attention so that there’s no doubt as to His will.

I get it.  I agree with it.  His points are very valid and I too find myself struggling and at times wishing the same.  As I went away from that conversation, I continued to meditate on what he was saying, wondering why it is the way it is.  I think most disciples would express very similar dilemmas and many will live out their walk stuck in that frustration.  So, how does one go about correcting that?

I found myself thinking about my experiences, struggles as well as successes, as a bowhunter.  I recognized some very strong parallels.  My success atop a mountain, usually comes after really tuning into the environment.  The game is not shouting from the ridge line, “hey, I’m over here!  You need to do this, then that and you’ll be on your way.”  What it requires is patience, development and immersion.  I have to live there.  It’s only after I truly abide on that mountainside that I develop a level of awareness that allows me to pick up on the seemingly invisible sights, inaudible sounds and subtle smells.  My level of alertness begins to match my surrounds and I can more fully recognize and realize those hard to perceive nuances.

If we want that level of connection with and awareness of the Lord, His wants, plans and desires for us, doesn’t it only make sense that it would require a total immersion in Him?  How can we expect to be able to discern His voice from our own or the other ambients striving to drown Him out, if we don’t live, abide in Him?

In Matthew 11:28 Jesus tells us, “Come to Me, all you who labor and are heavy laden, and I will give you rest.”   From the moment we heed that call, we recognize and receive it readily, His call to our salvation, His grace and mercy.  Unfortunately, that’s where too many stop.  We don’t get to realize the fullness of what He is offering, life in Him, because we don’t continue on into verse 29, “Take My yoke upon you and learn from Me,  for I am gentle and lowly in heart, and you will find rest for your souls.”  Then we wonder, “is this it?  Ok, I’m saved, but I thought there would be more.”

The good news, there is more!!!  Jesus tells us in John 15:4, “Abide in Me, and I in you.  As the branch cannot bear fruit of itself, unless it abides in the vine, neither can you, unless you abide in Me.”  He’s telling us, come and live in Me and you will experience the fullness I have prepared for you!  That’s it, My Friends!  You want to know the fullness, ease, peace and glory God has for you, abide in that Mountain!  Devour His word, converse with Him, pray, make yourself a permanent resident.  That’s what He wants.  He wants you to learn from Him, to be in tune, perfectly aware.  But, the only way that happens is to live there!  Praise God!  Have a blessed weekend!

In full pursuit of the greatest Trophy