Going into the election this year, we all knew that new things were inevitable, regardless of the result as we go through this season of change.  Several people I talked to were not pleased with the two main options in this year’s election and were looking at alternate choices or trying to decide between the lesser of two evils, so to speak.  Some may be happy with the result, and some will not, but life is often a mixed bag, not always just what we ordered.  I often hear that the older people get, the less they like change, because if its not broke, why fix it?  Even when changing to a new program, system, technology, job, phone, etc, the new learning curve may be frustrating to some, but usually there is a purpose to the whole thing.  We hope that we can improve something through the whole process.  It may be even more frustrating to go through lots of changes and come out worse off than when you started, but  at least, maybe you learned something through it?  How do you prepare yourself for change?

Early this morning, I got a phone call that you never want to receive.  The nurse on the other side just told me that my father had passed away.  In some ways, I may have even been expecting that as a possibility for a while, but at the same time, had a difficult time fully comprehending that reality.  It didn’t really hit me until it was really real.  And then I realized all the things that this new reality means.  I had to call people, get input, make arrangements, find things, change my plans, change the plans of others…lots of things.  All this while dealing with a new reality of life without my earthly father. 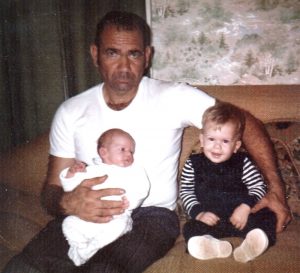 My dad helped take care of me as my life was starting, and I helped take care of him as his life was ending, so we learned more about one another than we may have originally planned.  I realized years ago that my dad was not perfect.  From following in his footsteps and thinking he could do no wrong when I was 5 years old, I have learned that he is a sinner and has his faults, just as we all do.  This process also led me to look to a Heavenly Father that is perfect and as I was adopted by this new Father, I began to emulate a new role model, but also came to understand the power of forgiveness that He models for me.  If He was willing to forgive me, I was capable of acting the same toward those around me.  I was able to forgive my dad for his shortcomings, no matter how many times I encountered them.  I was still able to love my dad, even though he was imperfect.

Therefore, if anyone is in Christ, the new creation has come:  The old has gone, the new is here!  2 Corinthians 5:17

I have been crucified with Christ and I no longer live, but Christ lives in me. The life I now live in the body, I live by faith in the Son of God, who loved me and gave himself for me.  Galatians 2:20

As we encounter changes, challenges, trials and difficulties in life, let us always look to what good may result.  Let us look to God to begin in us a good work that will result in good fruit, despite what it may appear to be at the time we first see it.  Allow Christ to sanctify you and bring you to a new place through each season and change you face in this life.   Desire that each change brings us to a place of increased understanding and maturity, so that we do not grow weary as we near the finish line.  Let us rejoice in the process until the final change transforms us from this life to the next!

Being confident of this, that he who began a good work in you will carry it on to completion until the day of Christ Jesus.  Philippians 1:6

Strength and Courage in Christ,
Clark