I received a delivery today that I have been anticipating and looking forward to since February.  It’s a new saddle.  I had it custom made by a company, out of New Mexico, named Truth Saddlery.  It is a company firmly rooted in faith, that conducts itself accordingly.  That is the principle reason I first considered using their services.  After looking over the their work I was convinced that I wanted to support them as a company, but also as a ministry.

After having the opportunity to put my hands on the new saddle, I am impressed by the craftsmanship and quality of workmanship.  However, what really struck me was the attention to detail and the care given to the branding.  There is true pride in what they’re doing and Who they represent.  It’s not pride for vanity sake, it’s pride in Christ.  It’s pride in the work they’ve been chosen and gifted to do.  It’s pride of ownership in the relationship they have with Jesus and the relationships that are born and fostered in connection to it.  They wear it, display it, share it and live it. 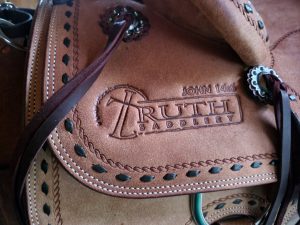 During this analyzation, I began to look inward and realized that we are all “branded” by something.  Those of us in Christ are “branded” by the cross and washed in His blood.  But, do we wear it with pride?  Do we display it, share it and live it?  It is likely that we each wear many “brands”.  I am “branded” with the mark of “father”, “son”, “brother”, “friend”, “bowhunter”, “artist”, “writer”, etc.  I am also branded by things that are not favorable, most notably… “sin”.

The questions that keep resonating through my heart are, “which ‘brand’ is most often on display?  Which ‘brand’ is most distinctive and shows the greatest attention to detail?  Which ‘brand’ is the one I hold closest?  Which ‘brand’ do I take the most pride in?  If I showed others all that I have been “branded” by, which ‘brand’ would they say most accurately denotes the manner in which I live my life?”  Each and every one of us has an identity, a collection of life’s experience that have shaped how we think, feel, act, and how we are perceived by others.  It’s up to us which “BRAND” we choose to represent and whether we do it and the Owner of the “BRAND” honor.  Have a blessed weekend!

In full pursuit of the greatest Trophy

← Vital Gathering at Debbie's Celebration Barn, Sunday, September 12 from 5-7 pm Be a Man Who Works for God →