God’s Standard Not Mine 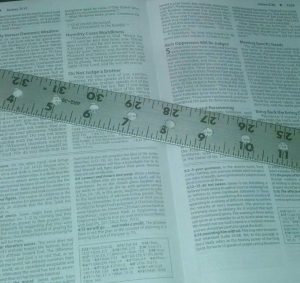 Before accepting Jesus Christ as Lord of my life, I had a great many areas in my life that weren’t Christ like.  I certainly didn’t give thought to how Jesus would have me think or behave in any given situation.  So, why am I so often surprised and appalled when a non-believer thinks and behaves like a non-believer?  It’s a fair question.  I imagine a good many of you do the same.

Galatians 2:14 But when I saw that they were not straightforward about the truth of the gospel, I said to Peter before them all, “If you, being a Jew, live in the manner of Gentiles and not as the Jews, why do you compel Gentiles to live as Jews?

When a non-believer doesn’t act as a christian should, what right have I to be upset?  What right have I to turn my back, shun and exclude them?  God doesn’t.  I know this, because He didn’t turn His back on me.  Instead, He exercised patience, showered me with love, kindness and compassion, not contempt.  He placed others in my path that could reflect the values He wanted to see in me.  He persisted until He got through.

As representatives of the transforming power of Jesus Christ, isn’t that an obligation we have to honor?  I’m not saying turn a blind eye, condone or participate.  I’m not saying remain silent.  I’m saying reserve judgement for the One whom it belongs.  I’m saying don’t you dare turn your back, because “I just can’t associate with that ‘type’ of person”.  How can we hold other’s to a standard that, though we strive for, we ourselves will not attain?  What if everyone who aided in bringing us to the saving grace of Jesus Christ, had instead stood in judgement, condemnation, saying we just don’t measure up?

Be reflective of Jesus.  Give those who have not seen the truth reason to pursue it.  Be a light in the darkness for those trapped in the bondage you were once captive yourself.  You can share what it right and good when you see something wrong, but remembering that you didn’t know, until you knew.  God bless you and have a joyous weekend!

James 4:17 Therefore, to him who knows to do good and does not do it, to him it is sin.

← Seeking What Is Your Heart Condition? →