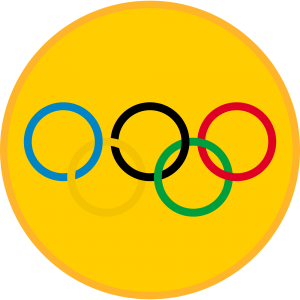 Here we are again!  The Summer Olympics are upon us and we get to watch competitions, hear stories, and cheer for our favorite table tennis players that we had never heard of before last week.  There is more competition crammed into 2 weeks than you can get through much of the year.  With such variety from archery to wrestling and everything in between including badminton, canoeing, cycling, sailing, judo, and trampoline, there is sure to be something to interest even the most avid couch potato.  For each of the over 200 gold medal winners there are many more who will go home without a medal, but only the experience of competing in the Olympics.  So, who are the real winners here?

There have been studies done on the happiness of the medal winners in several Olympic games and they found that the third place Bronze medal winners tended to be more elated than the second place Silver medalists, who were so close, but so far from finishing first.  Is that the goal of each athlete…go for the gold or go home?  If you listen to the hype and build up for some events like gymnastics or certain track and field events, they often tell you who is favored going into an event.  These expectations put extra pressure on some athletes or teams to perform, or else they fail to live up to the unrealistic demands placed on them by all the fans in their home countries.  Can you imagine the disappointment of getting third best in the world when there were so many hopes that you only get the gold?  What can this do to a person? What about those who do get the gold…is this the pinnacle of life?

I press on toward the goal to win the prize for which God has called me heavenward in Christ Jesus.  Philippians 3:14

The Olympics are a snapshot of the human condition, not just in training for years to succeed in a specific athletic event, but in how people deal with victory and defeat, whether real or perceived.  For the other 99.999% of us who will never compete against the world’s best in any event, how do we determine success or failure in our lives?  If we have a better house, car, yard, kids, etc. than our neighbors?  Who are we competing against and who determines the winner?  As Christians, what expectations do we place on ourselves or our families and what criteria do we use to say whether or not we were successful?  I have heard many say that all they want is for their children to have a better life than they did, or that their children grow up to know Jesus.  If our score is 2/3 children does that mean success or failure as parents?

I have fought the good fight, I have finished the race, I have kept the faith. Now there is in store for me the crown of righteousness, which the Lord, the righteous Judge, will award to me on that day—and not only to me, but also to all who have longed for his appearing.  2 Timothy 4:7-8

I feel that God is with us more in our disappointments than in our victories.  Often, when we feel we are successful, we take most of the credit for getting ourselves to that point.  When we realize our failures and deal with them, we are forced to admit that we are imperfect and the realization of our need for an advocate who can help us becomes reality.  No matter how much we train and how many plans we make, we cannot do it perfectly and live up to the laws set by God or by man.  No matter how many perceived failures we have had, there is still the one hope that remains of victory in Jesus.  When we put our trust in Him, we can be sure that he will guide us to something greater than gold, no matter the victories or defeats we have experienced in life.

But whatever were gains to me I now consider loss for the sake of Christ.  What is more, I consider everything a loss because of the surpassing worth of knowing Christ Jesus my Lord, for whose sake I have lost all things. I consider them garbage, that I may gain Christ and be found in him.  Philippians 3:7-9

Strength and Courage in Christ,
Clark

← How do you love a God you cannot see? Wasted Game, Wasted Gains →