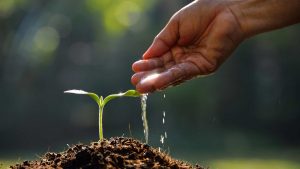 Well, its officially Spring and things are starting to look that way.  We have had a little rain and some sun and there is a hint of green starting to show in the land.  Growing up on a farm, I took it for granted that things grow.  I wasn’t in charge of the farm operations, but I got to help with things.  I remember my dad loading bags of seed corn in the planter and after several days, just waiting for things to grow.  I was more involved in what went on in the garden behind the house where we dug in the dirt with our hands to plant potatoes and a variety of seeds.  This was more meaningful to me than endless rows of corn, because I could see more directly what helped things grow well, or not so well, and how it impacted the harvest we got from it.  What lessons do you take from the natural order of the world?

He causes his sun to rise on the evil and the good, and sends rain on the righteous and the unrighteous.  Matthew 5:45

The same lessons are still available today, and take place in a variety of forms in my life.  A week ago, I had a few little helpers with me as I put down some grass seed in a few spots of the yard, as it is a good object lesson for life.  If conditions are good, in a month or more, we should see some results.  There are several variables that impact how things grow in the yard, field, garden, or anywhere.  Many of these are out of our control, such as the temperature, amount of rain, sun, wind, and animals, etc.  But there are things within our control, such as the timing of when we plant, where we plant, additional water, fertilizer, etc.  So, while we have some role in the process, its not a guarantee either way.  Ask any farmer, it takes a bit of faith that things will go well each year to allow for a good crop.

Then he told them many things in parables, saying: “A farmer went out to sow his seed. As he was scattering the seed, some fell along the path, and the birds came and ate it up. Some fell on rocky places, where it did not have much soil. It sprang up quickly, because the soil was shallow. But when the sun came up, the plants were scorched, and they withered because they had no root. Other seed fell among thorns, which grew up and choked the plants. Still other seed fell on good soil, where it produced a crop—a hundred, sixty or thirty times what was sown. Whoever has ears, let them hear.”   Matthew 13:3-9

What were the conditions that allowed you to become a believer in Christ?  Were they favorable or an unlikely scenario?  Maybe you had family or friends who shared their faith with you, or maybe it was a seeming random encounter with a stranger.  Could you imagine what it would take for someone in a country with less than 1 percent of Christians in the population?  In either case, there are no guarantees.  You likely know someone who grew up in a ‘good Christian home’ who is not a believer today, despite favorable conditions.  There are others who come out of seemingly impossible scenarios who’s lives are changed and are now champions for the Kingdom of God.  When you think about how people grow best, it is with a mix of adversity as well as good growing conditions.  Your faith grows when it is tested and challenged by difficult conditions in life, and causes your roots to grow deeper as you become stronger.  There are several lessons the Lord can teach us from the world around us, as we walk and grow closer to him.  This in turn will motivate us to help others grow as well.  How has your planting been going?

For this reason, since the day we heard about you, we have not stopped praying for you. We continually ask God to fill you with the knowledge of his will through all the wisdom and understanding that the Spirit gives, so that you may live a life worthy of the Lord and please him in every way: bearing fruit in every good work, growing in the knowledge of God.  Colossians 1:9-10