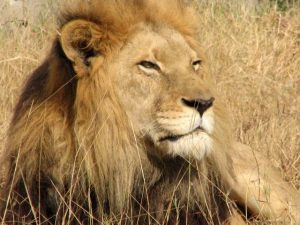 One of the first Bible stories most of us learned as Children, even if we didn’t frequent a church, was likely Daniel in the lions’ den. It is an amazing story both of Daniel’s faith and God’s faithfulness. A part of the story that is often missed is all the work Daniel put into being a disciple BEFORE the lions’ den. Everyday Daniel followed God in ways both big and small. He read Scripture, followed that Scripture, prayed regularly, and followed the Spirit. Because Daniel made following God a habit, he was more than ready to stand strong when his faith was challenged.

Then these high officials and satraps came by agreement to the king and said to him, “O King Darius, live forever! All the high officials of the kingdom, the prefects and the satraps, the counselors and the governors are agreed that the king should establish an ordinance and enforce an injunction, that whoever makes petition to any god or man for thirty days, except to you, O king, shall be cast into the den of lions. Now, O king, establish the injunction and sign the document, so that it cannot be changed, according to the law of the Medes and the Persians, which cannot be revoked.” Therefore King Darius signed the document and injunction. When Daniel knew that the document had been signed, he went to his house where he had windows in his upper chamber open toward Jerusalem. He got down on his knees three times a day and prayed and gave thanks before his God, as he had done previously. Daniel 6:3-10

Here are three habits we can learn from Daniel:

1. Listen to God’s Wisdom: The Bible says Daniel was successful in leadership and life because he had an excellent Spirit in him. Another way of understanding that is he had God’s wisdom. He learned it from reading Scripture and listening to the Holy Spirit. How often are you truly listening to God’s wisdom in your life?

2. Act on God’s wisdom: One of the biggest challenges for Christians is acting on God’s wisdom. We know what is right and what is wrong, but we often fail to act. Daniel acted for God everyday, both when it was easy and when it was difficult. In what ways do you need to be regularly acting and serving God?

3. Prepare everyday for a rainy day: Why was Daniel ready to face the lions? Because he had constructed a deep relationship with God each and everyday. All his little actions had made his faith rock solid. In what ways do you need to connect with God daily to ensure you are ready to stand firm when the rain and difficulties come?