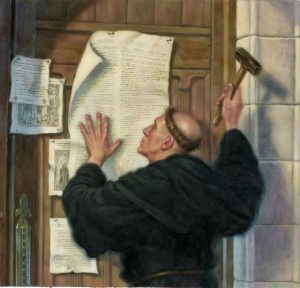 A week from now marks the 500th anniversary of Martin Luther proposing his Ninety-five theses, which was influential in beginning the Protestant Reformation movement.  We don’t typically use the word theses these days, but it was an academic position against the church tradition of selling indulgences, and why it went against scripture.  This was a strong condemnation against a common practice at the time, which also made the church a considerable amount of money.  What would your reaction be if you showed up to church on Sunday, and someone had posted a list of grievances against the way the church was operating?  Would you consider the reasoning and take it to the church leadership, or try to put a stop to it right there?

Now the Berean Jews were of more noble character than those in Thessalonica, for they received the message with great eagerness and examined the Scriptures every day to see if what Paul said was true.  Acts 17:11

While our society and church practices are somewhat different now than they were in Luther’s time, the idea of challenging the powers that be and consequences for doing such a thing are not too different than they are today.  You may know, or even have been a part of a disagreement within a local church that caused a portion of the believers to break off and start their own church.  This happened a few months after I started attending a church when I was in college, and I realized there was more going on behind only what we saw on Sunday.  What about you…if there is something going on in a church that you don’t agree with, or don’t understand, where do you go for answers?  What measures do you use for the way you worship or practice your faith?

Whoever has ears, let them hear what the Spirit says to the churches. The one who is victorious will not be hurt at all by the second death.  Revelation 2:11

If the reformation ended after the theses, Europe and much of the world may have only ended up with just Catholic and Lutheran churches, which looked similar except for the practice of indulgences.  But the reformation continued in a number of different locations, resulting in a wide variety of practices and denominations including the Episcopalian, Reformed, Baptist, Anabaptist, Methodist, Pentecostal, and Presbyterian churches, among others.  So how do you decide which church practices are the most true and under which you will follow and raise your family?  Do you compare them to the scriptures and look at the lives of those who worship at each place?  Will there be Baptists and Catholics together in heaven?  Truth be told, you will not find a perfect church community, because they are all filled with imperfect people.

Dear friends, do not believe every spirit, but test the spirits to see whether they are from God, because many false prophets have gone out into the world.  1 John 4:1

When deciding on anything, ask God to give you direction through prayer.  Seek his guidance and leading and have trusted friends to consult, who will be truthful with you in all things.  Test everything you do and believe against the scriptures, and if there is anything in question, take a closer look at your life and practices, and keep asking ‘why’.  Holding to these things will help bring out the truth in your life an in others.  There will always be wolves in sheep’s clothing among us and people who want you to join a movement for the wrong reasons.   So always guard your heart and mind and keep a strong connection with your Heavenly Father, to avoid such pitfalls, and you will be glad you did.