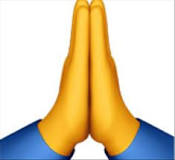 If someone you know, but don’t talk to often sends you a message, saying they are thinking about you with the praying hands emoji, what does that mean to you?  Most would probably think, oh, they intend to pray for me, or they did pray for me, or something along those lines, even if you didn’t ask them to, which is nice.  Its nice in that in most Christian communities, even before emojis were a thing, when concerns were made known, we have been saying to each other, ‘I’ll pray for you.’  If you think back to all the times you said this to fellow brothers and sisters, then walked away…how many times did you actually share those concerns with God for that person?  Likely not every time, but hopefully most of the time, as otherwise that makes us liars, and that’s not good.  Do you think your prayers make a difference?

Therefore confess your sins to each other and pray for each other so that you may be healed. The prayer of a righteous person is powerful and effective.  James 5:16

Which do you think is better, to tell someone you will pray for them, and forget to, or to not tell them anything, but still pray for them?  I probably tend to do that latter more often than not, as I honestly want to keep my word and my promises, but that is partly based in fear or selfishness.  But I suggest a better option than either of these two.  Pray for them directly, when the opportunity presents itself.  If you are talking with them, ask if its ok, then lay your hands on them and pray right there.  It doesn’t have to be a ten minute extended oration, but even simply just asking God to help in their need may suffice.  Honestly, It is a step of faith on both of your parts.  Even if you are not with them, you can text or email a prayer to them as well.  It’s not as personal, but they will know your intentions and actions.  And even keep them in your prayers for some time, if you can.  It may not only change them, but change you as well.

As for me, far be it from me that I should sin against the Lord by failing to pray for you. And I will teach you the way that is good and right.  1 Samuel 12:23

They say the road to hell is paved with good intentions, but good intentions followed by good actions is the road we should follow, as it is what Jesus taught us to do.  If we say we will pray for someone, lets do that.  If we feel for someone in a difficult situation, but don’t know what we can do, just ask and offer to help if they need, and pray for them, even if you are unsure.  Even better, is to pray for them and ask God what you should do in this situation, as often He will give you some ideas.  Often what it boils down to, when we pray for others, we put their needs before our own, and in part that is loving them.  When those prayers are followed by helpful words and actions, that is also demonstrating that we love and care for each other, and that is what Jesus asked us to do as well, isn’t it?

We love because he first loved us.  Whoever claims to love God yet hates a brother or sister is a liar. For whoever does not love their brother and sister, whom they have seen, cannot love God, whom they have not seen.  1 John 4:19-20