If I could only write one last devotional and was unable to write another this would be it.  This is the most important message I know to write.

Jesus was born into a time when men had turned God’s 10 commandments into over 600 laws that no one could keep up with.  It was a time of insiders and outsiders and the gap between was immense.  Jesus tells a parable in a crowd of thousands.  Many were outsiders attracted to the teaching of Jesus and some of the crowd were the very religious.

(Matthew 25:1-12) At that time the kingdom of heaven will be like ten virgins who took their lamps and went out to meet the bridegroom.

Now the religious people are getting excited.  Jesus is talking about perfect virgins who have not violated their standards expecting Jesus to show the outsiders just how far out they are.

Five of them were foolish and five were wise. The foolish ones took their lamps but did not take any oil with them. The wise, however, took oil in jars along with their lamps. The bridegroom was a long time in coming, and they all became drowsy and fell asleep. At midnight the cry rang out: “Here’s the bridegroom! Come out to meet him!” Then all the virgins woke up and trimmed their lamps. The foolish ones said to the wise, “Give us some of your oil; our lamps are going out.” “No,” they replied, “there may not be enough for both us and you. Instead, go to those who sell oil and buy some for yourselves.”

Now the religious people are getting more excited.  Oil represented life and the Spirit.  It is not just about perfection but the anointing of God.  They do not expect what is about to come.  Before we get too harsh on the religious people, it is the same thing when we think we are right with God because we go to church, pray, or are a good person. Jesus was making a point that your church attendance, prayers, and giving will not save you.  Also that you cannot be a good enough person.  Lets keep going…

But while they were on their way to buy the oil, the bridegroom arrived. The virgins who were ready went in with him to the wedding banquet. And the door was shut. Later the others also came. “Sir! Sir!” they said. “Open the door for us!” But he replied, “I tell you the truth, I don’t know you.”

We get to the end of the parable and you would expect Jesus to day he would have let the 5 others in because they were perfect enough and had enough oil.  But Jesus turns the whole story upside down and says it is, “I do not know you” for why the other women were not allowed in. 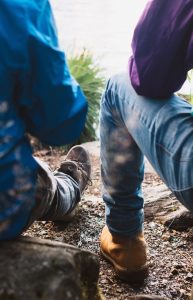 So Jesus says the key to salvation is not being a good enough person, going to church, serving, giving, or fulfilling the requirements of the law and morality.  He said it is all about knowing Him.  You see when Jesus died the veil to the Holy of Holies was ripped, showing the separation for knowing God had been resolved in Jesus death. Now we have the same access to God’s Spirit as the High Priest did.

So where do you stand in knowing God?  I am not asking if you read the Vital devotional, read your Bible, or pray, however those can help.  I am not asking if you know about God like you know about a president.  I am asking do you know God.  The greek word Jesus used for know refers to know intimately like a best friend.  Do you know God like that?  If not don’t feel bad, Just learn to know.  How?  Worship, praise, share your heart, and listen for His voice.  He said His sheep know His voice.  I pray today that you would grow in your know God as a friend. Spend time today and everyday developing friendship with the One who loves you and created you to know Him