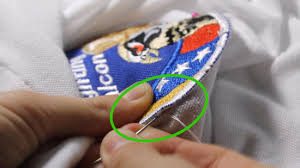 This past week, I was challenged and put to the test a few skills I had learned years ago.  When anyone challenges a man to a certain physical task, there often seems to be a certain competition gene that kicks in and gives you the motivation to see what you can do, even if it is a skill you are not great at normally.  If someone challenged you to foot race, a feat of strength, a driving competition, a trivia challenge, or even a thumb wrestling match, depending on the competition, we may give it a manly go.  What if it was something that was not considered that manly?  I had to see if I could still thread a needle, do some tiny stitches and repair a few items that needed fixed (one of which I broke myself).  After about 7 small repairs, I had some success and was ready to take on the world again, or at least stitch up a few wounds, if needed.  What are some of your God-given skills, or untapped talent, that you don’t get to use that often?

Iron sharpens iron, and one man sharpens another.  Proverbs 27:17

Several years ago, I was flying from Denver to San Diego and sat next to a young man in the Air Force special forces who was a good sized, strong looking fellow.  I asked him a little about what he did and his training for his work and one thing he mentioned he had to do a lot of through his training was sewing exercises.  This big, macho dude had been trained to use a needle and thread, really well.  It was important for his work, he said, but also taught him patience and focus on the task at hand.  That is the last thing I would have guessed, but it made sense.  My wife, who is in the Army, also reiterated this and said that you have to learn to sew well fairly quickly, or be a weasel and try to get someone to do it for you all the time.  So, being able to sew, cook, and take care of children will not only help you grow as a man, but it will give you a greater appreciation for what others can do as well. Is there anything that you consider beneath you as a man?

In your opinion, what qualities does it take to be a strong man?  There are things that this world says we should be and there are things that God says we should be.  Some are similar and some are not.  By most measures, a man should be strong, not only because of his testosterone and physically being able to do some things that require extra strength, but also to be mentally and emotionally strong and having the determination to address what really needs to be done in any given situation.  Having certain skills to do his job well and to be respected by others is also admirable.  If you can believe a man at his word, and trust that he is telling the truth in any given interaction is also a quality to be valued.  He is as honorable in his private life as he is in public.  Being responsible and putting others needs before his own desires takes strength.  What other things does it take to be a good man?

How can a young man keep his way pure?  By guarding it according to your word.  With my whole heart I seek you; let me not wander from your commandments!  I have stored up your word in my heart, that I might not sin against you.  Blessed are you, O Lord; teach me your statutes!  Psalm 119:9-12

What qualities did Jesus exhibit to us that is admirable in a man?  He knew his mission while here on earth and carried it out by honoring his Father’s will.  He was tempted and had the opportunity to use his power and position for selfish gain, but instead chose to be a servant to all.  That is the most admirable quality I have ever seen in any person.  Having the opportunity to use position and privilege for selfish reasons and instead choosing to serve others for a greater good takes strength and discipline.  That is love in action!  That takes guts, determination, and being able to see beyond your own self.  May we all strive to do such in our own lives this day and always!

For we do not have a high priest who is unable to empathize with our weaknesses, but we have one who has been tempted in every way, just as we are—yet he did not sin. Let us then approach God’s throne of grace with confidence, so that we may receive mercy and find grace to help us in our time of need.  Hebrews 4:15-16