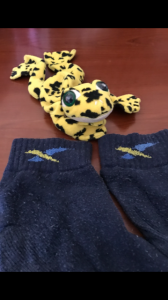 This photo may seem pretty ordinary and on the face or it appears to be a frog and some old socks, but is there more to the story?  Years ago, back when I was in grad school I went with a group from our school on my first Spring Break mission trip to the backwoods of Eastern Kentucky.  We did a variety of cleaning and repair activities for an alternative high school in the area that took in kids kicked out of the public schools in that area, as mining had once been the main industry in the area, but had since shut down.  Much of our time was spent cleaning up garbage that was dumped or left out in some area.  Once while working along a stream, I saw this speck of yellow and pulled this frog out of the bank, and rinsed it off in the water.  He seemed happy for me to pull it from that early grave, so I took him home.  The socks had a similar story.  While on a mission trip to Costa Rica, our group was cleaning up a home that had burned down and I saw this pair of socks still mostly intact, so after washing them, they still smelled a little smokey, but got a new life for a few years on my feet and became my ‘smoke socks.’  While these were not really remarkable buried treasures, they often reminded me of the value of being redeemed from obscurity and certain death.  Have you ever redeemed anything or anyone that was tossed away by the world?

But now thus says the Lord, he who created you, O Jacob, he who formed you, O Israel:  “Fear not, for I have redeemed you; I have called you by name, you are mine.  Isaiah 43:1

One of the definitions of redeemed is to ‘gain or regain possession of (something) in exchange for payment.’  Here in Iowa, many people still collect and redeem beverage cans to collect the five cent value that has been placed on them.  While we can recycle metals and other objects to reclaim the inherent value in them, do we ever think about the value placed on the people we encounter each day?  When someone dies unexpectedly, insurance companies can place a value on them based on their potential to earn an income for the remainder of what would have been their natural lives.  We probably ascribe value to others based on how influential they are in our own lives.  I once heard a worker described as ‘worthless’, meaning they didn’t do their job very well, and that kind of played out true in the situation that was described to me.  But ultimately, how do we know what anyone is capable of doing and even if they barely earn their paycheck, or are currently unemployed, do we still disregard what they are capable of doing?

Or do you not know that your body is a temple of the Holy Spirit within you, whom you have from God? You are not your own, for you were bought with a price. So glorify God in your body.  1 Corinthians 6:19-20

One person saw us as worth paying the ultimate price to call us His own.  Each of us was bought by God at the price of the blood of Christ and we may often overlook what that means in our normal day to day existence.  Do we see others around us as valuable enough that someone would give their life for them?  Can we also see that others around us may be worth that price as well?  Are those that have been redeemed or may yet be in the future seen as having that same worth to us as they have to God?  It changes my perspective on who and what I see as valuable, or worthy to be redeemed.  May you see that value in the same places as God see sit.

And they sang a new song, saying,  “Worthy are you to take the scroll and to open its seals, for you were slain, and by your blood you ransomed people for God from every tribe and language and people and nation,  Revelation 5:9

← Jesus first healing, a son from far away Two Ears One Mouth →