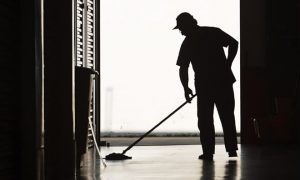 I’m starting to realize I’m being watched.  Not by Big Brother or the NSA, though if they want to monitor my phone calls, I have to pity whoever would listen to the conversations.  However, there are little eyes in my home taking note of everything I do from how I hold my arms, to the way I dance, to the words I say.  I’m being copied on a fairly regular basis.  I didn’t realize the small things I do would have such an impact on another person.  I hope he doesn’t pick up on any bad habits, which I may not realize are even bad habits.  I hope I don’t pick up any of his bad habits, or start having more temper tantrums.  I suppose we all have some influence on one another, both in big ways in small ways.  Who is most influential in your life?

We hear headlines every day of people in positions of power getting exposed for crimes and misdemeanors they commit both on the job and in their private lives.  In reality, one mistake can end a person’s career or family without much of a chance to ‘take it back’ or ‘make things right’.  Less famous folks like us don’t make the headlines with similar deeds, but there are also relationships that are restored through forgiveness and changed lives.  These stories with a good ending don’t usually make the news, but when we hear them, it gives hope for any and all of us who have messed up in the past.  When we think about it, we are all guilty of more things than we would like to admit, and most of us could probably go to jail if we lived by the letter of the law and confessed every misdeed to the authorities.  Hopefully, we learn from our mistakes and keep from doing stupid things in public, as well as in private, when no one is watching.  What if your deepest secrets were posted in the headlines?

Do not be misled: “Bad company corrupts good character.”  1 Corinthians 15:33

I’ve often wondered what kinds of things we will be given to do in Heaven.  I don’t think lying around playing harps will even be on the list.  Learning new skills and composing new worship songs is more likely, even if you are not musically inclined now.  Exploring the fullness and intricacies of creation and building new structures to promote God’s glory will be an adventure.  We may get to explore and practice these things to a lesser degree here and now, but think of the possibilities in either place!  As Mr. Rogers used to remind us, ‘sometimes it’s good to imagine.’   Do you think what we do in this life will have an influence on what we do in Heaven?

Live in harmony with one another. Do not be proud, but be willing to associate with people of low position.  Do not be conceited.  Romans 12:16

If you are a parent, you have people looking up to you as a role model.  If you work with anyone else, you have people watching you as an example to them.  If you have siblings or a spouse, you are a living example of how a Christian practices their faith on a daily basis.  The pressure is not to be perfect in everything, but to strive to do your best, to grow from mistakes, and to seek forgiveness as you forgive others.  What we practice in this life, we will be able to live out fully, without the tangles of sin, when we sweep the streets in heaven.