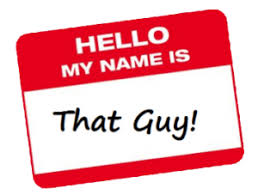 This past week, we drove over 800 miles and everywhere we went we often saw ‘that guy.’  That guy (or gal) who drove like they were in an emergency, who sat a few extra seconds when the light turned green, drove like they wanted to get somewhere 2 seconds before everyone else, who sat in the left lane 5 mph below everyone else, who thought they were the most important person on the road.  They stood out from everyone else because, for whatever reason, they were too fast, or slow, or crazy, and did not drive like everyone else did.  You not only find ‘that guy’ on the road, but also in stores and around the community demanding every privilege and entitlement they feel they deserve, often at the expense of others.  They blame their own misfortune and unsatisfactory predicaments on others and demand to be treated more fairly when they already have been.  They often just behave like a self-centered jerk, to put it mildly and are just not pleasant to be around.  They may not even be aware of what they are doing and sometimes you may even feel the obligation, in some manner, to let them know.  Sometimes you even realize, you are that guy!  Have you ever been that guy?

Whoever corrects a mocker invites insults; whoever rebukes the wicked incurs abuse.  Do not rebuke mockers or they will hate you; rebuke the wise and they will love you.  Proverbs 9:7-8

As humans, sometimes we offend and hurt others with our words, actions, or inactions.  We don’t always intend to hurt them, but when we do, it is sometimes easy to see with some people when they let us know, but others may not say anything.  The question then becomes, ‘what is your response?’ when you realize that you have hurt someone’s feelings by what you have done?  We can ignore it and decide that they are just being too sensitive and thin skinned.  We can just go on without saying anything and try not to do the same thing again.  We can talk to them about what happened.  We can tell them we are sorry and ask them to forgive us, even if we feel we were not in the wrong.   There are a lot of ways we could respond, but humility and few kind words often go a long way to help repair hurts, whether intentional or not.

Do nothing out of selfish ambition or vain conceit. Rather, in humility value others above yourselves, not looking to your own interests but each of you to the interests of the others.  Philippians 2:3-4