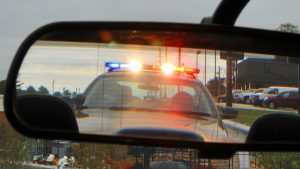 A couple nights ago, I had a dream where I was driving and had just gotten pulled over, but I didn’t know why, because I was sleeping while driving and couldn’t remember.  The officer gave me a lecture stern warning about not doing that again, and I was grateful, even in my dream.  In reality, since I started driving, I have been pulled over a few times and each time assumed responsibility and the consequence for my actions, but thankfully, these are rare occurrences.  What is your reaction when you are caught doing something wrong?  Do you deny that you were doing anything wrong, try to justify your actions as right, or own up to it and take whatever punishment you deserve?  Maybe all of the above at different times?

Let everyone be subject to the governing authorities, for there is no authority except that which God has established. The authorities that exist have been established by God.  Consequently, whoever rebels against the authority is rebelling against what God has instituted, and those who do so will bring judgment on themselves.  For rulers hold no terror for those who do right, but for those who do wrong. Do you want to be free from fear of the one in authority? Then do what is right and you will be commended.  For the one in authority is God’s servant for your good. But if you do wrong, be afraid, for rulers do not bear the sword for no reason. They are God’s servants, agents of wrath to bring punishment on the wrongdoer.  Therefore, it is necessary to submit to the authorities, not only because of possible punishment but also as a matter of conscience.  Romans 13:1-5

All of us are under some type of authority, at different times in our lives.  The authority of your parents and teachers when you were a child, your boss at work, law enforcement when you are out in public, elected officials who make laws for where you live, etc, so no matter where you go, there is some usually someone in charge.  As we grow up and test boundaries, we often challenge the authority of our parents, try to avoid police officers when we conduct questionable activity, and may even try to avoid paying more taxes than we should when the government asks for it.  Basically, issues that have been around since man has walked the earth.  What happens when you fight authority?  Either you get humbled and put back in your place, or you become emboldened when you think you outsmarted or evaded punishment, and continue till you eventually pay the price.  Either way, as the song goes, authority always wins.

Therefore God exalted him to the highest place and gave him the name that is above every name, that at the name of Jesus every knee should bow, in heaven and on earth and under the earth, and every tongue acknowledge that Jesus Christ is Lord, to the glory of God the Father.  Philippians 2:9-11

Just remember that no authority has power, unless it is given to them, and it can be taken away as easily.  It is our nature to think we are right, no matter how wrong we may be, and when that comes up against someone trying to enforce the law, something gives.  When we live peacefully with those around us, we usually have nothing to be afraid of.  When we surrender to, and live under the Authority of the Kingdom that Jesus describes to us, we gain rights and responsibilities beyond whatever earthly laws you live under.  When we look at how Jesus acted during his time here on earth, what is expected of us should not really be a question.  He had the authority to give and take life at any point,  and yet he submitted to the authorities around him to the point of death.  In doing this he brought about new life to those in his Kingdom.  And there will be joy and rejoicing under his authority because of this for all eternity.

Your kingdom come, your will be done, on earth as it is in heaven.  Matthew 6:10