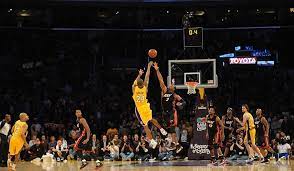 If you are like me, you may enjoy a good battle and a last second win when it comes to a sports competition.  Most teams have lifelong fans that just want to see them win the championship, but for over 90 percent of fans, that doesn’t happen most seasons.  June is an exciting time for sports fans.  Baseball season is in full swing, the NBA Playoffs are down to the last 4 teams, the Stanley Cup Playoffs are nearing the finals, and the world’s best athletes are gearing up to compete in the Olympics this next month.  If you like competitive sports, we are not lacking in opportunities to cheer on the best, or even the underdog from time to time.  Would you consider yourself a sports fan, and if so, are you loyal to the same team you have followed for most of your life?

I have seen something else under the sun:  The race is not to the swift or the battle to the strong, nor does food come to the wise or wealth to the brilliant or favor to the learned; but time and chance happen to them all.  Ecclesiastes 9:11

To be honest, I am not a true fan of the same teams I followed and cheered for as an elementary student.  Most of the teams I rooted for were default teams of my older brother and his classmates, so I don’t have the same allegiances today.  You may also be a fan of your local team because that’s where you and maybe even your kids went to school and played sports.  There is nothing wrong with cheering for the hometown team, unless you take it too seriously.  There are even many fair weather fans, who just jump on the bandwagon when a team is having a great year, or there is a special athlete that brings them in to watch.  But what value is there in playing sports or rooting for your favorite teams each season?  Playing sports teaches you teamwork, how to communicate, how to play within the rules, and may even improve your health in some instances.  But you may also learn how to bend the rules, play favorites, cheat, or develop a win at any cost mentality.  With any competition, things can be taken to extremes, and you don’t have to look far to see scenarios where there is a lot of time and money spent to develop kids into wanna-be professional athletes.  But why…for scholarships, or fame, or glory, or money, or pride?  If you just look at statistics, you will realize that less than 1 percent of athletes will ever play professional sports, but that shouldn’t keep them from trying, right?  But when we don’t realize our 10-year-old dreams of being a baseball All-Star, then what?  We can still live vicariously by cheering for our favorite teams, and encouraging our kids and the local team to do their best as well, even if they have a losing season.  Is that still worth it?

Therefore, since we are surrounded by such a great cloud of witnesses, let us throw off everything that hinders and the sin that so easily entangles. And let us run with perseverance the race marked out for us, fixing our eyes on Jesus, the pioneer and perfecter of faith.  Hebrews 12:1-2

If you go into almost any high school in America, you should be able to find a wall with the Track and Field record holders listed, often with some going back several decades.  But eventually, most world records will be broken.  Just this past week, a young man broke a Shot Put World Record that stood over 31 years, in front of his hometown crowd.  Even your favorite championship team goes back to 0 wins to start the next season, with added pressure to repeat the past season’s performance.  There are many arguments about who is the greatest athlete of all time in most sports, and arguments are made daily to support one or the other great athlete.  But will all the cheering and glory we give these competitive sinners even come close to the praise and worship that is due to the one who created each of these teams and the less than perfect people that played on them?  We don’t have to look far to find idols and people worshiping other people and teams when it comes to sports.  But can we still root for our teams and encourage our kids and grandkids to have fun playing, even if they don’t win or get a scholarship?  Its definitely possible, and losing gracefully, without getting angry or criticizing the refs or the other team is a good step in that direction.  So, if your favorite team wins this year, enjoy the moment, because it won’t last long.  If your favorite team has a losing season, be encouraging when someone else is having a good year, and learn some humility in the process.  Just ask any Cubs fans, who had to wait 108 years between World Series titles.  Regardless of who you cheer for in any game, just remember that its just a game, and there are more important things in life than just winning and losing games.  May God give us the wisdom to keep things in balance with games, work, relationships, and every other part of this life.

Watch and pray so that you will not fall into temptation. The spirit is willing, but the flesh is weak.  Mark 14:38

Blessed is the one who perseveres under trial because, having stood the test, that person will receive the crown of life that the Lord has promised to those who love him.  James 1:12