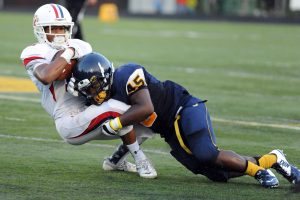 Well, for those who like sports, these past couple weeks begins an exciting time for some with the onset of the Football season.   I had not been much into football, since my Elementary and High School days.  The past several years, I have been invited to participate with a Fantasy Football league.  Honestly, prior to this time, I mostly only watched the Super Bowl and knew  a handful of players in the whole NFL.  I rooted for my favorite childhood team, the Steelers, when they made the playoffs or Super Bowl, but I wasn’t a true fan each season.  I enjoyed a good game or two, but have really been a fair weather fan when it comes to most sports teams.  How about you, is there a team that you are dedicated to?

Blessed is the one who perseveres under trial because, having stood the test, that person will receive the crown of life that the Lord has promised to those who love him.  James 1:12

Years ago, when I was in college, I lived for one Summer in Danville Virginia.  I found the place to stay when I visited a small church and met an older fellow named Orville Eichhorst, who coincidentally, was originally from Iowa.  Well he rented out rooms to myself and a couple other guys for the Summer, and when we returned home most evenings, he could be found watching the Chicago Cubs on WGN.  While he had been a life-long Cubs fan, he never got too excited or upset if his team won or lost, but was just a faithful follower.  Orville passed away before he could see his team win the World Series, but I have a pretty good idea of what he would have thought.  He impressed me so much with his commitment, not just to baseball, but to his faith as well, that I said a special cheer in his honor, when that near impossible feat did occur.  Who in your life has impressed you with their faithfulness?

How about when it comes to your faith, would you consider yourself a fair weather fan, or a committed, die-hard fan?  We like to think that we will hold fast to the true faith and stay committed till our end, whenever that may be, but we may not know how that will all play out.  You may have seen others in your life that have been a good example of how to finish well in life.  What things stood out to you as an excellent example of a true follower of Christ?  Is this more common or the exception to those you have seen finish the race?  Most of us do not want to think about what we will do when our time comes, but that time is waiting for each one of us.  Maybe we can look to the Heroes of Faith listed in Hebrews and think we would like be remembered in a similar, maybe less notable way.  There is still time left in the game.  When the score is all said and done, may you be found on the winning team, because you know the final score!

I have fought the good fight, I have finished the race, I have kept the faith.  Now there is in store for me the crown of righteousness, which the Lord, the righteous Judge, will award to me on that day—and not only to me, but also to all who have longed for his appearing.  2 Timothy 4:7-8