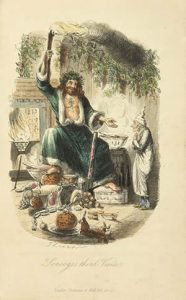 Over the Christmas holiday, at least once or twice, I heard part of the story from Charles Dickens A Christmas Carol over the radio or television.  It’s been done and redone in a number of different ways by Disney characters, with Bill Murray in Scrooged, and probably others that I haven’t seen.  It probably doesn’t get told or read much outside of the month or so leading up to Christmas, but it is fairly well known in the general culture, maybe even more so than the original Christmas Story.  So. love it or hate it, it will likely be around for another 150 years.  Anyway, each time I hear it, when Scrooge is visited by the spirit of his former business partner, and then by the ghosts of Christmas past, present, and future, I am reminded of another story in scripture that carries similar tones in the warnings and lessons it contains.  The story Jesus tells of The Rich Man and Lazarus seems to carry a similar theme of someone being presented with the undesirable future that awaits him and then realizing it may be too late to change the past, but wanting to make sure the future has a more favorable outcome.  Are there any parts of this story that mirror events in your own life?

“He answered, ‘Then I beg you, father, send Lazarus to my family, for I have five brothers. Let him warn them, so that they will not also come to this place of torment.’  Luke 16:27-28

We all may have some idea of what it would take to convince us, or others of a truth we struggle to believe.  If a friend of relative with a substance abuse addiction struggles to see the self-destructive consequences of their behavior, then we may try to show them stories of dozens of others who have gone down that path before.  If someone lacks the presence of God and the forgiveness found in Jesus in their lives, we may try to help illustrate to them what the eternal outcome will be in a number of different ways.  We may even pray for them to see the need they have been ignoring for so long.  We may even pray for someone to give a message they can relate to and that will bring them to a place where they repent and seek the forgiveness found in Christ.  The Rich Man in the scripture story says the same thing…if only my brothers can be warned of what awaits, they will surely change!  But we are led to believe that even the dead appearing to them will not convince them.  If a ghost warned you about something that was likely in your future, what would be your response?

“He said to him, ‘If they do not listen to Moses and the Prophets, they will not be convinced even if someone rises from the dead.’”  Luke 16:31

The truth is, that the Truth of the Gospel has been around us in different forms for all to see and hear for some time.  If people wanted to hear and believe this truth, they have likely had the chance to do so.  Yet, they may still not grasp the seriousness of their choice, or lack of decision.  Unless we have come to a place where we have given up on our own self-sufficiency and seen our need for a savior, we would likely be heading down the same path as everyone else.  Maybe Dickens story carries the same message for everyone to be warned that the choices they make each day have eternal outcomes, whether we realize it or not.  May the life you lead, and the things you say and do today, illustrate to others the joy that is found in Christ.  Whether this be made known by a fictional ghost, by scripture, or by promptings of the real Spirit of God, may the result be a changed life, as it was for the new Scrooge when he awoke on Christmas morning!