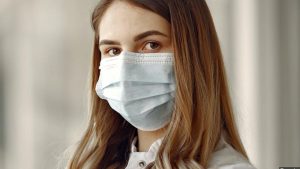 If you were to see someone walking along the street carrying a gun, what assumptions would you make about them?  You might think they are hunting, and unless you live in a tiny town, its probably illegal.  You might think they are law enforcement and would probably be identified as such.  You might think they are afraid for their lives and are trying to protect themselves from a perceived threat.  You might think they have an ulterior motive and may call law enforcement to check it out.  Without asking, its easy to jump to conclusions when you see something out of the ordinary, as that’s what our brains do, as red flags go up.  What if you see someone walking down the street with a facemask, what assumptions would you make about them?  You might think that they are attempting to prevent the spread of the Covid virus, keeping their face warm on a cold day, or trying to make a statement about their political beliefs.  Similar assumptions might be made when you see someone out in public not wearing a mask.  Most people tend to politicize and oversimplify things and throw everyone into a category of you are either for us, or against us, based on a few outward signs or symbols, like the kind of vehicle you drive, the color of your skin, the clothes you wear, or whether they can see your face.  But do they really know you by looking at you?

If someone were to look at you on the street, would they know you were a Christian?  Its easy to make assumptions based on outward appearances, but they might ask you a few questions to get a better idea.  You might think that someone who dresses well, is polite, smiles, etc might be a good candidate, but you never know.  Are those good tests for knowing someone’s heart?  A simple one would be to ask “Are you a Christian?”  Though you might be surprised by the answers you get for this, it should narrow it down a bit.  Other questions might be along the lines of ‘How do you love other people?’, ‘Do you have any unforgiveness in your heart?’, ‘Do you pray?’, etc.  If someone were to look at you in a church, would they think that you were a Christian.  Does choosing to be in a church automatically make you a Christian?  If God were to look at you, or your heart, would He believe that you were his child?

By this everyone will know that you are my disciples, if you love one another.  John 13:35

If you were to ask most people, they would probably say that some inconvenience is acceptable to keep yourself and others from getting sick.  Wearing a mask in public, giving others personal space, and staying home when you are sick might take a little effort, but it is putting the needs of others before your own.  Others feel that their personal rights are being violated by being asked to do something they don’t want to do, and maybe feel this is a slippery slope to having a microchip implanted in their brain.  Don’t worry, as that day is coming, but we are not quite there yet, and is not even close to real persecution.  One way to show love toward others is to put their needs before my own, and I for one don’t think that is a huge sacrifice to make.  These are difficult decisions for all, but let us prayerfully consider what Jesus would call us to do in any and every situation we encounter each day.  Let Him be glorified in your life, whatever that may look like.

Do nothing out of selfish ambition or vain conceit. Rather, in humility value others above yourselves,  not looking to your own interests but each of you to the interests of the others.  Philippians 2:3-4

← Bring On The Blessings- Part 2 Faith By Grace →