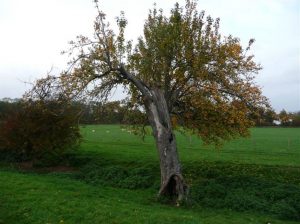 There is a small apple tree that I drive by most every day that still has several apples hanging on it.  A few years back, when running by this tree, I stopped and took a few apples and ate them.  They were good!  Every fall, I say I should stop and get a few more again.  The thing is now, after several hard freezes, the fruit is not good to eat.  I have tomatoes and several large pears at the top of our pear tree in the same situation that I did not get.  I hate seeing things like this go to waste.  I enjoy being able to donate extra fruit to someone who can use it whenever I can’t, but inevitably some of it does not get used, either because of an early freeze, or just because I don’t have time to pick and process it all.  Was the tree’s life in vain if all the fruit doesn’t get used?  Do our lives matter if we display as much good fruit we are capable of producing?

The next day as they were leaving Bethany, Jesus was hungry.  Seeing in the distance a fig tree in leaf, he went to find out if it had any fruit. When he reached it, he found nothing but leaves, because it was not the season for figs. Then he said to the tree, “May no one ever eat fruit from you again.” And his disciples heard him say it.  Mark 11:12-14

So, earlier today, I got a message that a trusted brother in Christ had passed away after a recent bout with cancer as he neared 80 years old.  He became a Christian at an early age, and I only really got to know him well over the past 5-10 years as we worked on common causes at our church.  As I had seen, he was always steadfast in his faith and desire to do the right thing with the time and finances as God entrusted him.  We all need examples of how to do things well, both at work, at home, and in our walk of Faith.  I mourn the loss of my friend and mentor, not just for selfish reasons, but because of his example for me and others and how he used his knowledge and talents to serve others, and still could have.  I’ve also lost young friends not even 10 years old who have had a lasting impact on me in different ways, yet who’s life was not in vain.  Let us live to produce fruit that lasts as well!

Therefore encourage one another and build each other up, just as in fact you are doing.  1 Thessalonians 5:11

I’ve heard people say, ‘if only so and so would become a Christian, imagine what an impact they would have.’  That is our limited thinking, and not often how God works.  We think someone popular will make a bigger difference for God’s kingdom than someone no one knows, like me our you.  But God delights in using the lesser known, the nobody, and the underdog as much as or more than anyone of note to accomplish His will in this world.  In reality, any fruit produced for the Kingdom of God is good fruit, regardless of how small or large the crop.  Some who come to the Faith later in life may not have as many years to bring in the harvest, but they may still accomplish a lot in the limited time they have.  Don’t count anyone out.  In the same way, look at where you spend your time, money, energy, and talents each day and ask if there is something more you can do to help bring about the Kingdom of God.  I know I fall short most days and want to grow in this also.  Let us try!  Let us do this for His glory!

But the fruit of the Spirit is love, joy, peace, forbearance, kindness, goodness, faithfulness,  gentleness and self-control. Against such things there is no law.  Galatians 5:22-23