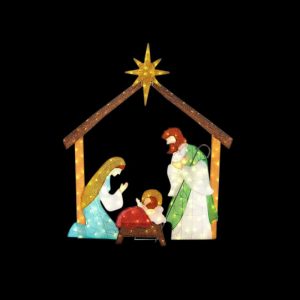 And there were shepherds living out in the fields nearby, keeping watch over their flocks at night.  An angel of the Lord appeared to them, and the glory of the Lord shone around them, and they were terrified.  But the angel said to them, “Do not be afraid. I bring you good news that will cause great joy for all the people.  Today in the town of David a Savior has been born to you; he is the Messiah, the Lord.  This will be a sign to you: You will find a baby wrapped in cloths and lying in a manger.”

Suddenly a great company of the heavenly host appeared with the angel, praising God and saying, “Glory to God in the highest heaven, and on earth peace to those on whom his favor rests.”   When the angels had left them and gone into heaven, the shepherds said to one another, “Let’s go to Bethlehem and see this thing that has happened, which the Lord has told us about.”  Luke 2:13-15

Have you ever thought about what sights and songs the shepherds experienced out in the fields that night?  It must have been quite remarkable, because if this happened to me, I would have proceeded cautiously, though what the angels said would have likely lingered in my mind.  I wonder what songs were sung around the newborn king that night, and if they had any idea of the hundreds more that would be sung in the centuries to come that would celebrate with them?

While we were caroling with a group from my church this past week, we asked each of the recipients (from young children to those with Alzheimer’s) if they had a favorite Christmas song.  Some did and some did not, but most enjoyed our attempt to sing some familiar songs in the cool December night.  How about you?  Do you get a little excited when you hear Hark the Herald Angels Sing on the radio, or is it more of something you dread?  Do you sing along, even if slightly off key?  After all, it only comes along 1-2 months each year, right?

Even if you don’t enjoy singing them, have you ever read about the history of how some of these songs came to be?  Many are quite remarkable and give you a small glimpse into the time and place they were written.  Inspired by the Psalms, a composer named Isaac Watts published a tune called Joy to the World in 1719.  A century later in 1818, a song called Stille Nacht was written in a little Austrian town that would be sung for many years to come.  And just who is Good King Wenceslas?  There are probably new songs sung each year that we will never hear, but that someone does.

Sing joyfully to the Lord, you righteous; it is fitting for the upright to praise him.  Praise the Lord with the harp; make music to him on the ten-stringed lyre.  Sing to him a new song; play skillfully, and shout for joy.  Psalm 33:1-3

Most years, I even come across songs that have just been written or that are new to me that find a place on my favorite list.  A recent one (which came out 10 years ago) that I enjoyed was an arrangement of Angels We Have Heard on High by Sara Groves, which has more of a Southwestern feel to it.  There are also those secular songs that have nothing to do with Christ or Christmas, except the title, that are still popular each year, but for different reasons.  Though they may be catchy, Rudolph the Red Nosed Reindeer offers more praise to animals than anyone, Last Christmas may have you longing for big 80’s hair more than a quiet Christmas night, and who even heard of Six White Boomers.  You get the idea.

This is love: not that we loved God, but that he loved us and sent his Son as an atoning sacrifice for our sins.  1 John 4:10

So, this coming week when you get a chance to sing along to some of those familiar songs again, do it as a praise to your Lord who was born a little baby two thousand years ago, and lives with us still today.  The God of the Universe gave us hope through a helpless baby that would one day take away the sin we could not remove ourselves.  Think on how his life and death would inspire so many to write songs of praise and thanksgiving for the gift that we could never repay.  Think of all the songs yet to be written and sung that will bring a new appreciation for the Newborn King as he is born into the hearts of new believers around the world each day.   Even if you don’t enjoy singing, doesn’t it make you want to sing, even a little?