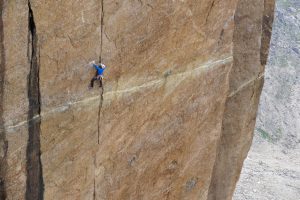 Years ago, I was hiking in a jungle with my brother, another good friend, and a woman who would eventually become my wife.  We read about this trail that led to a waterfall, so thought it would be worthwhile to check it out.  We hiked down in the valley, then found the trailhead off the main road.  It was pretty overgrown, but after a mile or so on the trail along a small river, we eventually came to an 18’ stone wall.  Our hike seemed to come to an abrupt end, though we walked along the river looking for a place to cross, but not seeing anything resembling a way, and not wanting to scale the rock or risk our health, we decided to turn around and hike back.  The hike was nice, but we didn’t end up where we had planned.  What literal or figurative walls have you found yourself up against in life that changed where you were going?

We are hard pressed on every side, but not crushed; perplexed, but not in despair;  persecuted, but not abandoned; struck down, but not destroyed.  2 Corinthians 4:8-9

Yesterday, I received a message from a good friend of mine, who was actually in my wedding party.  He is only a few years older than me, but this man coordinated a bible study I was in while I was in college and still a young Christian.  I was also in his wedding over 20 years ago and though they live about 6 hours away in Northern Wisconsin, I usually went every year in late Summer to visit him, his wife and family of 9 kids, who refer to me as ‘Uncle’.  Over the past few years, he and his wife have been having difficulties communicating and getting on the same page with parenting and after much counseling and other attempts to both work to better their roles for their spouse and family, they have separated.  There was no infidelity and they have not filed for divorce yet, but the future does not look good.  I prayed with him over the phone and often pray for his family as well, but it is not going how we had hoped.  Yet we still have hope in a Savior, beyond any present circumstances.  Would you?

Trust in the Lord with all your heart and lean not on your own understanding;  in all your ways submit to him, and he will make your paths straight.  Proverbs 3:5-6

Things don’t always go the way we plan in life.  That is not to mean they always turn out bad, but often not the way we thought.  Then we have to decide if we can still go on with a plan, even if it is not our own plan.  Most of us don’t like taking orders from others, unless we trust them.  Sometimes it takes hitting a wall for us to realize that we are not always in charge of our outcome.  Do you still trust the Lord when you hit that wall?  Will you still keep walking with him, even if you have to go a different direction or even turn around?  You might have to start over in some ways, or may end up In a better place than you intended, but nothing is for certain. How we adapt and deal with challenges and difficulties in life should reveal a lot about our faith and where our hope truly is.

No, in all these things we are more than conquerors through him who loved us.  For I am convinced that neither death nor life, neither angels nor demons, neither the present nor the future, nor any powers,  neither height nor depth, nor anything else in all creation, will be able to separate us from the love of God that is in Christ Jesus our Lord.  Romans 8:37-39